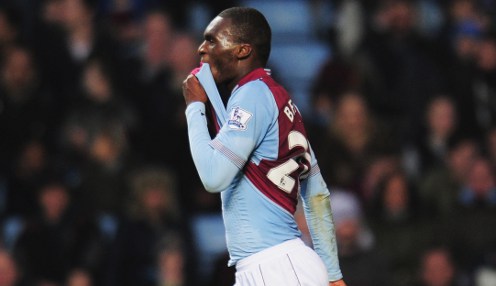 The agent of in-form Aston Villa striker Christian Benteke says that the player is focused only on the remainder of the season and not a potential summer transfer.

The 24-year-old Belgium international Benteke has burst into life in recent weeks, scoring nine times in his last eight games in all competitions.

And that hot streak has prompted reports of interest from other Premier League clubs, but Eris Kismet insists that his client is not concerned about such talk at the moment, with Villa still trying to banish the threat of relegation and prepare for an FA Cup final appearance.

Kismet told Sky Sports: “At the moment there is no interest. Every player and staff member is concentrated on avoiding relegation, anything else is just a distraction.

“I know everyone wants the same thing because I watch the games and I think Aston Villa are playing the best football in England right now.”

Benteke joined Villa in the summer of 2012 from Racing Genk and enjoyed a productive first season in England, before a loss of form and fitness problems hampered his progress last term.

He had only found the net three times this season before finding his touch in front of goal in recent weeks.

Villa, who are currently just two points outside the drop zone, are 7.00 to be relegated this season, while they can be backed at 1.10 to escape and secure their Premier League status.

Meanwhile, the Midlanders are 3.50 to lift the FA Cup, with holders Arsenal their Wembley opponents.