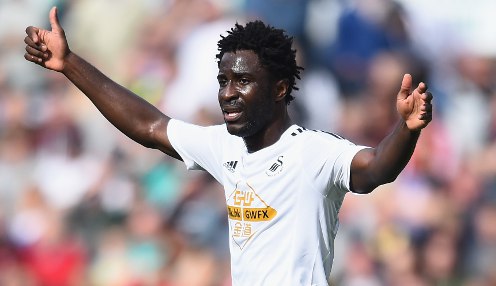 Wilfried Bony was a big success during his time with Swansea City.

Manchester City striker Wilfried Bony is determined to be fit and firing for the start of the new season, having struggled in his first few months at the Etihad Stadium.

The 26-year-old Ivory Coast international scored just twice in 12 appearances for the Citizens following his £28million move from Swansea City in January, having struggled with ankle and knee problems.

It is about getting fit and trying to do my best for the new season.

And Bony has now been forced to miss the club’s pre-season tour of Australia and Vietnam due to illness, although he is on the mend on training at the City Academy.

He told the club’s official website: “I was ill, now it is okay. I feel stronger than last week, so I am happy about that.

“At the beginning it was hard. There were a lot of discussions with the coach and doctor, but they said it was better for me to stay here than almost 24 hours flying.

“Now I am okay, I am very happy and training. I think everything is clear, so I am just waiting to do my best for the season.

“I can say there were good moments and bad moments (last season) – but it is more important to think about what is coming now. It is about getting fit and trying to do my best for the new season.”

Bony’s chances of regular first-team football at City next season look likely to be boosted the departures of Edin Dzeko and Stevan Jovetic this summer, leaving the Ivorian and Sergio Aguero as their main strike options.

Aguero can be backed at 34.00 to be top goalscorer in the Premier League next season, with Arsenal ace Alexis Sanchez 17.00 and Liverpool new boy Christian Benteke 17.00.