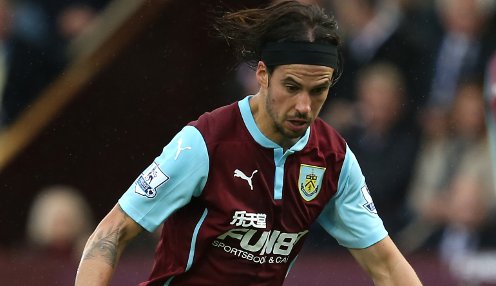 George Boyd is confident Burnley can defeat Tottenham and Arsenal.

George Boyd is adamant that Burnley can pick up some Premier League survival points in their upcoming games against Arsenal and Tottenham.

The 29-year-old forward has played a key role in Sean Dyche’s side this season as the Clarets have bravely battled to defy the odds and remain in with a great chance of staying in the top flight despite being written off following last year’s automatic promotion from the Championship.

We proved against Man City we can beat anyone so we’re looking forward to it.

With eight games remaining Burnley are only one point off Sunderland in the final position of safety, but face top-four chasing duo Arsenal and Tottenham in their next two matches.

But having defeated reigning champions Manchester City on home soil recently, thanks to Boyd’s goal, he claims the side have nothing to fear when Spurs arrive in town on Easter Sunday before the Gunners are at Turf Moor a week later.

“We proved against Man City we can beat anyone so we’re looking forward to it,” he said.

“They’re massive (games). Especially with the atmosphere we had against City. If we can get that again and get the crowd behind us then we can beat anyone on our day.”

He added: “It was amazing against City, I’ve not known anything like that since I’ve been here. It really spurred everyone on and it was a massive part of us winning the game.”