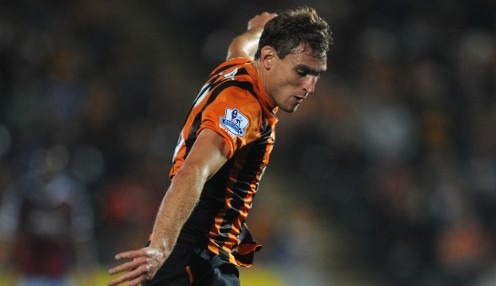 Hull City manager Steve Bruce says the Tigers would already be safe from relegation trouble if striker Nikica Jelavic had been fit for most of the season.

The Croatian forward, who has scored eight goals for Hull this season has missed the last five games with a knee injury and had a similar problem back in October.

However, he is back in training and could even play some part on Monday night as Hull welcome Arsenal to the KC Stadium.

Bruce is sure that Jelavic would have led Hull to survival if he had been fitter for longer. He said: “For me, if he had stayed fit all season then we would have been fine. Our troubles came when he got injured in October.

“You are only as good as your strikers, no matter what level you are at. Top or bottom. We struggled without Jelavic.”

Our troubles came when he got injured in October.

Hull have eased their relegation worries through successive victories over Crystal Palace and Liverpool.

However wins on Saturday for Aston Villa, Leicester and Sunderland leave Steve Bruce’s side still in danger, just a point clear of the bottom three.

After the Arsenal game Hull play at home against Burnley, away at Tottenham and finish up with a home game against Manchester United.

Arsenal are in fourth place ahead of the game but a win at the KC Stadium would take them back up to second.

Steve Bruce welcomes back Andy Robertson from injury and David Meyler from suspension while Arsene Wenger is still likely to have Mathieu Debuchy and Mikel Arteta missing while Alex Oxlade-Chamberlain and Abou Diaby are also short of fitness.