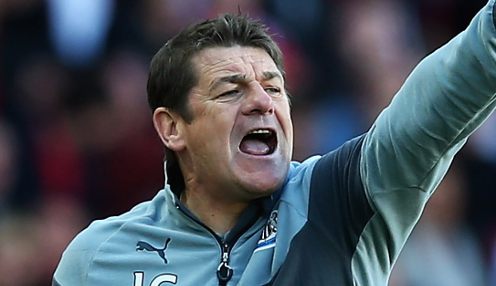 The 50-year-old has overseen a wretched run of seven straight defeats and last Saturday against Swansea City was confronted by angry supporters in the dug-out at St James’ Park.

“We didn’t talk about anything other than my situation and about what my players are doing on the pitch. It was all about me and how I had to cope with it.”

McClaren has guided Derby County into the play-off places ahead of the final day of the Championship season on Saturday and is widely reported to be a front-runner to replace Carver if he is let go by the north-east giants.

“We didn’t talk about anything other than my situation and about what my players are doing on the pitch. It was all about me and how I had to cope with it.

“He said, ‘It’s been a difficult thing for you, John, I understand that. But you’ve handled it quite well. You’ve had to cope with it’.”

When asked if McClaren had declared his interest in the Newcastle job, Carver said: “No, no, absolutely not. Absolutely, 100 per cent. He just asked how I was coping with it, how I was dealing with it.”

Newcastle face a trip to the King Power Stadium on Saturday to take on fellow strugglers Leicester City in a huge game which could shake-up the Premier League relegation places, while McClaren’s Derby need a point at home to Reading to seal a place in the Championship play-offs.

Newcastle United are currently priced 15.00 to be relegated from the Premier League at the end of the season.