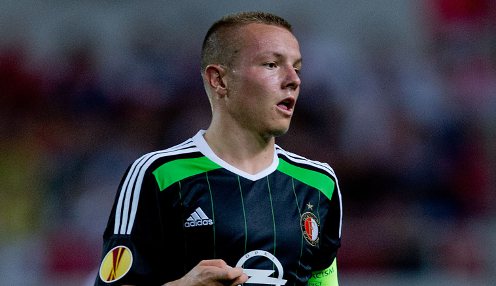 Jordy Clasie says he has joined a “big club” in Southampton after penning a five-year contract with the club following his move from Feyenoord.

The Saints have moved quickly to replace Morgan Morgan Schneiderlin following his switch to Manchester United, splashing out a reported £8.4million on Netherlands international Clasie.

Southampton boss Ronald Koeman has been tracking the 24-year-old for some time given the uncertainty surrounding Schneiderlin’s future over the past year and will now finally be reunited with the player whom he gave his debut to while in charge of Feyenoord.

Clasie has developed into one of the top central midfielders in Holland during his time at De Kuip and was part of Louis Van Gaal’s 2014 World Cup squad.

Having felt like he has conquered the Eredivisie, Clasie says the time was right to move on, claiming the chance to play in the Premier League and work with Koeman again was too good an opportunity pass up.

“It feels good to be joining Southampton. It’s a nice club, and I’m happy to be here,” Clasie said. “It’s a big club playing in what I think is the biggest and most important league.

“Ronald being here is a big thing for me and that was important in me coming here, but even if he wasn’t here, I’d have come to this club.

“I played every game for him. He’s a good trainer and a good man so I like him, but I came here not only for him. I came here for the club.

“I’ve watched many games of Southampton, and it’s felt good when I’ve watched these games. “I hope that I have many good moments and good years here.”

Southampton are 3.25 to finish in the top six in the Premier League this term, while they are 1.28 to end the campaign in the top half of the table.