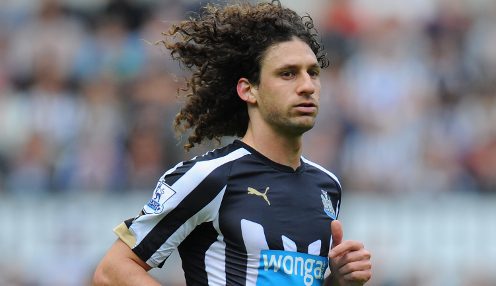 Newcastle United skipper Fabricio Coloccini has called for all concerned with the club to pull together to try and ensure Premier League survival for next season.

The Magpies have slumped to eight consecutive defeats in the league and are just two points clear of the drop zone with three games to play.

Players and staff have come together in order to leave all past problems aside and to focus 100 per cent on the three ‘cup finals’ that we have left.

And veteran Argentinian defender Coloccini, who has tasted relegation once before with Newcastle, is desperate for the Tynesiders to rescue themselves before the season comes to an end.

In an open letter on the club’s official website, Coloccini wrote: “On behalf of the squad we would like to apologise for the moment we are going through.

“The time we have left to turn around this situation is short, but after the end of the season we will try to learn from the mistakes we made so that we don’t have to go through this again.

“Players and staff have come together in order to leave all past problems aside and to focus 100 per cent on the three ‘cup finals’ that we have left.”

Newcastle are 6.50 to be relegated this season, while they are 1.12 to beat the drop, while local rivals Sunderland can be backed at 1.66 to drop down into the Championship.

Next up for the Magpies is a visit from West Bromwich Albion on Saturday, before a trip to fellow strugglers Queens Park Rangers and a home clash with West Ham United round off the campaign.

And United are set to remain under the charge of interim head coach John Carver for those three games, who was given the backing of the club hierarchy in the aftermath of the 3-0 weekend reverse at Leicester City.