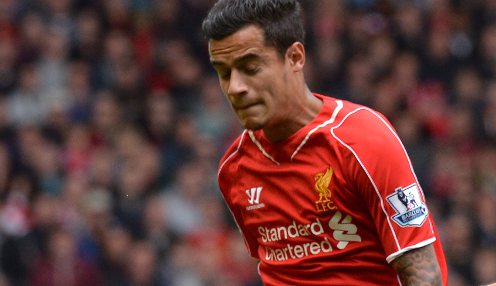 Philippe Coutinho is adamant that Liverpool can still qualify for next season’s Champions League, despite Sunday’s 2-1 defeat to Manchester United at Anfield.

The 22-year-old playmaker has been included in the Brazil squad this month for the friendlies against Chile and France and insists he is relishing his time with Brendan Rodgers’ side.

The weekend results left Liverpool five points behind fourth-placed Manchester United, but Coutinho has pointed out that Louis van Gaal’s side have a difficult run-in and still have to face Manchester City and Chelsea.

He said: “Top four is our target. Unfortunately, we lost an important game against Manchester United, but there are many matches left and they will still have to play other clubs at the top of the table. We still have a big chance of finishing in the top four.

“I am very happy at Liverpool. I’ve been learning a lot with Brendan Rodgers and from the experienced players in the squad as well. I do think I need to improve on scoring more goals and that is something I am working hard at.”

Liverpool are currently available at 4.33 to finish in the top four this season while Coutinho is 5.50 to score at any time for Brazil against France on Thursday.