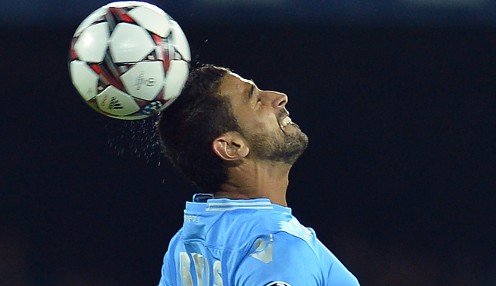 Miguel Britos has penned a three-year contract at Watford.

The Hornets, who secured a return to the top-flight couresy of a second-placed finish in the Championship last season, had already made seven new signings this summer following the arrival of new head coach Quique Flores.

And they have now further strengthened with 29-year-old Spanish playmaker Jurado, who played under Flores during four years at Atletico Madrid, joining from Russian side Spartak Moscow on a three-year deal.

My ambition is to help Watford to stay in the Premier League, and it is now a matter of concentrating hard on winning every game.

Jurado is joined at Vicarage Road by Uruguayan Britos, who has also signed a three-year contract folloiwng his move from Italian side Napoli.

The 30-year-old centre-half made over 100 appearances for the Serie A outfit and helped them win the Coppa Italia twice and the Super Cup once in addition to a second-placed finish in the league in 2013.

Britos was also was sent off in his final appearance for the Naples club after headbutting Alvaro Morata during a 3-1 defeat at Juventus in May.

He revealed that former Liverpool goalkeeper Pepe Reina, who he played alongside at Napoli, played a part in persuading him to join Watford and play in England, while he is looking forward to helping keep the club in the Premier League.

He told the club’s website: “I have been in Italy for seven years and the experience was great. Not only for me as a footballer, but as a person as well.

“But I always loved watching the Premier League so as soon as the opportunity to join Watford came up I didn’t need to think twice about it, I wanted to come straight away.

“My ambition is to help Watford to stay in the Premier League, and it is now a matter of concentrating hard on winning every game.”

Watford are 1.72 to be releagted this season, while they can be backed at 2.10 to stay up.