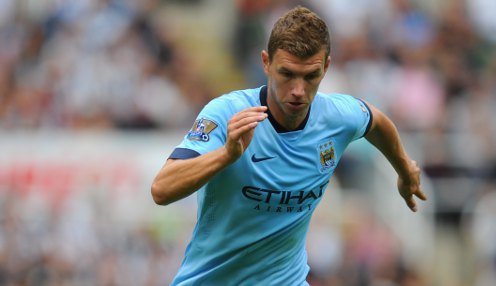 Manchester City striker Edin Dzeko is not certain to be at the club for the start of the new season according to boss Manuel Pellegrini.

Dzeko, 29, is on City’s pre-season tour to Australia but did not play in their win over Roma on Tuesday having been linked with a move to the Italian side.

The Man City boss admitted he left Dzeko out of the Roma game because his future is not clear.

“Edin didn’t play the last game as it’s not clear if he will continue here or not, but he is still working here with the whole squad,” he said.

Dzeko signed for City from Wolfsburg in January 2011 in a £27m deal and signed a new four-year contract at the Etihad Stadium last summer.

Edin didn’t play the last game as it’s not clear if he will continue here or not.

The Bosnia international was a bit-part player last season however, managing to score only four Premier League goals as City relinquished their crown to Chelsea.

With Sergio Aguero, 4.00 to be leading scorer in the Premier League next season, and January arrival Wilfried Bony seemingly ahead in the pecking order, Pellegrini may choose to allow Dzeko move on.

Man City have already forked out £49m on Raheem Sterling from Liverpool this summer while fellow England international Fabian Delph has joined up with the squad in Australia after completing his move from Aston Villa for £8m.

Pellegrini’s team are 3.75 to regain the Premier League crown next season, while Chelsea are 2.50 to retain the title.