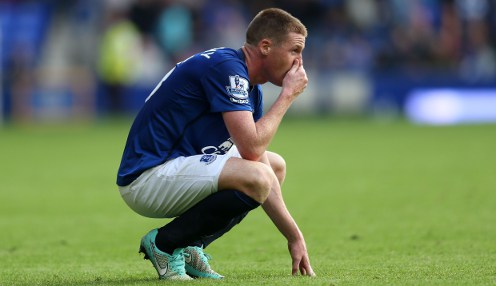 Everton boss Roberto Martinez says there is no chance the club will allow midfielder James McCarthy to leave this summer.

The Republic of Ireland international was one of the Merseyside outfit’s standout players last season, prompting several clubs to take an interest in the former Wigan man.

Media speculation has linked Manchester City, Tottenham and Arsenal with McCarthy but Martinez says there is no chance of him being allowed to leave.

The Spaniard says the 24-year-old still has three years left to run on his contract and the Toffees will not be cashing in at any price, claiming Everton are in a strong enough position financially to resist all offers.

“He’s not for sale. My responsibility is to bring competition into the squad and we have strong competition for places. We don’t want to lose that,” he said.

“We’re not in a position where we have to sell to balance the books and want to create a winning team.

“James McCarthy is a top performer. He has shown that over recent years. We know what he brings with young legs and good energy. He’s a vital part of our squad.”

Martinez was speaking after watching his Everton side qualify for the Asia Trophy Final in Singapore, eliminating Stoke City on penalties on Wednesday.

The former Wigan and Swansea boss was pleased with the work rate from his players during the semi-final, singling out Romelu Lukaku for special praise.

The Belgian, who is 41.00 to pick the Premier League golden boot, missed a glorious chance to win the game as the match finished goalless but that has not dented Martinez’s belief that he will start the new season strongly.

“His sharpness is going to come, he got in great positions and though his usual clinical finishing wasn’t there he was always a focal point for attack,” said Martinez. “He worked extremely hard and, in terms pre-season, he is well ahead of where he was last season.”