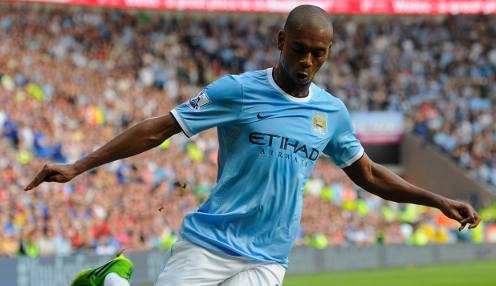 Fernandinho has dismissed reports of a dressing-room row with Manchester City team-mate and captain Vincent Kompany as “nothing major”.

Reports have claimed the pair were involved in a heated exchange during half-time of the 2-1 defeat by top-four chasers Liverpool at Anfield last month.

“It was nothing major. There were other people around us, and you have to raise your voice a little bit. There was no fight, just a conversation.”

Brazilian midfielder Fernandinho and Belgium defender Kompany were dropped from the starting line-up for the fixture against Leicester City three days later, but club officials denied their omission was because of a dressing-room spat.

The former Shakhtar Donetsk star Fernandinho said he did have words with Kompany but insisted there was no bust-up.

“People are creating and telling stories, even though it didn’t happen that way,” the Brazilian told the Manchester Evening News.

“It was nothing major. There were other people around us, and you have to raise your voice a little bit. There was no fight, just a conversation.”

City trail leaders Chelsea by five points in the race to defend their Premier League title and Fernandinho said it was important the players stuck together between now and the end of the season.

The six-time Ukraine title-winner added: “Every player in every team speaks to each other in order to improve the quality on the pitch – that communication is necessary. You have to talk, and that is what happened.

“There was a conversation and not much more than that. I don’t know why people actually thought there was a fight. We spoke about how we could improve things in that match.”

Chelsea are currently priced 1.11 in the Premier League outright betting and Manchester City are quoted 8.00.