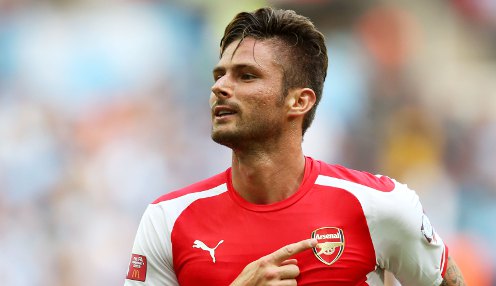 Arsenal striker Olivier Giroud believes that with a couple of new players the Gunners squad will be ready to mount a serious Premier League title challenge next season.

The men from North London are currently battling to try and secure second place behind champions-elect Chelsea, whilst they have also reached the FA Cup final for a second season in a row.

To get second and win the FA Cup would be a great season.

And Giroud believes that finishing just behind the Blues and securing a second successive Wembley triumph would represent progress, with better things to come next term.

He told his club’s official website: “Hopefully if we can have less injuries, keep the same group and with maybe one or two new players, we will have a great season.

“We have to finish this one first and to get second and win the FA Cup would be a great season. It has been a few years since we finished second and if we can do it we can see an improvement, which is great.

“But the championship is not finished, which is why we need to focus in the last five games to keep second place.”

Emerging midfield star Francis Coquelin held a similar view to that of his team-mate, as he told RMC: “We are disappointed with the result against Chelsea because we were on a good run.

“Now the target is to focus on the end of the championship, win all the remaining matches to get second place and of course win the FA Cup final.”

Arsenal can be backed at 1.33 to lift the FA Cup, with Aston Villa 3.50, while the Villans are 7.00 to be relegated come the end of the Premier League season.