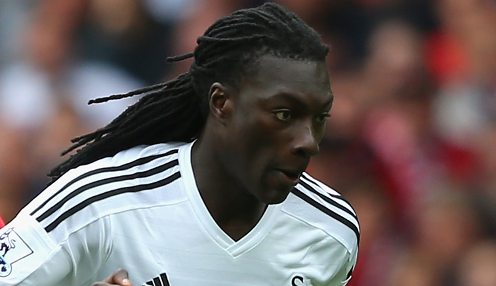 Bafetimbi Gomis is planning to stay with Swansea.

Bafetimbi Gomis says he expects to remain with Swansea next season following speculation over his future.

The striker initially struggled to force his way into the Swans side but he has seen more action of late following the sale of Wilfried Bony to Manchester City.

Gomis, who has three goals in his last two matches, had been tipped to either return to France or possibly link up with another Premier League club but the 29-year-old has told L’Equipe he is happy at the Liberty Stadium.

“I see myself here next season,” said Gomis.

“It’s true that I went through a rough patch, but I learned from it.

“It took time to adapt but mentally it was a good experience.

“I’m now very well in Swansea and in my mind I’ll be here next season.”

He added: “At Swansea there is a culture and philosophy that I like… that’s part of the reason I signed.

“I know I haven’t made a mistake. I see myself here next year although it’s difficult to make plans in football.”

Swansea host Everton on Saturday in the early Premier League kick off and are 2.50 to take all three points, while Gomis is 6.50 to open the scoring.