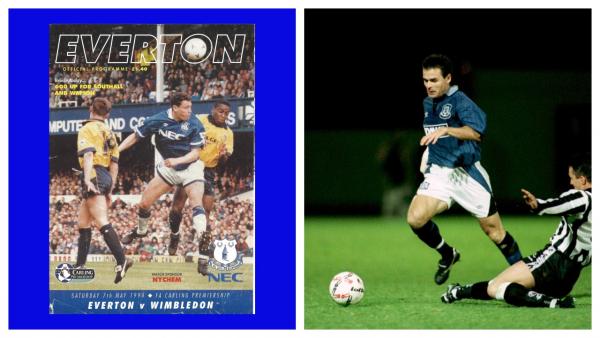 It is tough, very tough, to define greatness, particularly in terms of what makes a great football match.

Rarity would be a quality many would mention and not many games have begun with one team’s kit smelling of smoke but that was the case in this one for Wimbledon, whose bus had been set on fire overnight, allegedly by Everton fans.

Apparently though, smoky kit doesn’t immediately qualify a game for greatness. The good news is this one had plenty of other key factors which have left it burned on the brains of those who witnessed it.

For me, such key factors include an element of surprise and a piece of individual brilliance. If these can be delivered on a stage which really matters, all the better. This game ticked all three of those boxes.

Out of their hands

It is probably worth addressing the latter first to give the game its context.

Everton, the club with more top-flight seasons under their belt than any other, headed into it in the final relegation place, knowing even a win might not be enough for them to survive.

They were praying at least one of Southampton, Sheffield United and Ipswich would slip up. In the end, all three did but for much of the game at Goodison, it didn’t look like that would matter.

Wimbledon, who went into the match having won seven and drawn two of their last nine, quickly established a two-goal lead to leave the fans on three sides of the famous Grand Old Lady – like many top-flight grounds of the time the other stand was being rebuilt – almost literally silent.

It was a good Wimbledon team, make no mistake. The club will forever be remembered for their 1988 FA Cup success but this was the Dons’ Premiership (as it was then) peak. With a side featuring Vinnie Jones and Robbie Earle in midfield and John Scales – who would be back on Merseyside signing for Liverpool a few months later – in defence, they were about to equal their best-ever finish of sixth.

Another of the team’s stars, Dean Holdsworth, put them ahead from the penalty spot early on after an inexplicable handball by Anders Limpar. It was his 24th goal of the season.

The lead was soon doubled as Andy Clarke fired off a hopeful shot which was heading well wide until Gary Ablett got in the way to divert it into his own net.

Everton, champions just seven years prior, had their head almost through the trapdoor.

However, having seen everything go against them, the stars were about to align in spectacular fashion.

They grabbed a lifeline when Limpar (pictured below) tumbled under a challenge from the brilliantly-named Peter Fear. Had VAR been available, the penalty award would probably have been overturned and who knows where Everton would be now?

As it was, the spot kick stood and Graham Stuart, whose only previous penalty in his career had been missed, confidently slotted home in front of the Park End building site.

Everton should still have been dead and buried before the real drama began – Holdsworth missing two good headed chances before the break and then seeing an effort bundled off the line with what looked suspiciously like Stuart’s hand after the interval.

Bolt from the Blue

Like so many great games, there was a sense that something special was brewing and so it proved.

Midway through the second half, Barry Horne won a challenge in midfield and took the ball, somewhat awkwardly, in his stride. He nudged it forward off his thigh before letting fly with his right foot.

With the ball not fully under control it was exactly the sort of effort which could have been sliced away towards the corner flag. As it was, Horne struck it perfectly. To use golf parlance, it was not a slice, more of a fade, the ball bending into the top corner from more than 30 yards out. The definition of unstoppable. 2-2.

It was the game’s most memorable moment but the one which lifted its status to greatness was still to come. It arrived with nine minutes to go, Stuart exchanging passes with Tony Cottee and striking a low shot past Hans Segers. Cue delirium.

Segers’ poor dive received much attention. Indeed a few years later it formed evidence against him in a corruption trial from which he was acquitted.

What was known is he had no chance with either of the other two goals and it was hard not to say that Everton had saved themselves in remarkable fashion.

Had the winner not come, the Blues would have gone down. Instead, it was Sheffield United who made the drop, conceding in injury time to lose 3-2 at Chelsea – a goal which saved Ipswich.

A frankly ramshackle team had delivered from a position of utter peril when it mattered most, in the process making this a truly great game.