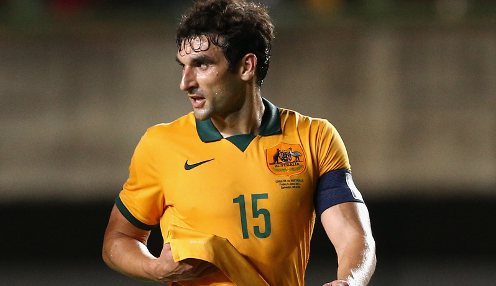 Midfielder Mile Jedinak says he is happy to remain at Crystal Palace.

Central defender Brede Hangeland expects his side to enjoy another good season next term, having signed a new one-year contract at Selhurst Park.

The 33-year-old Norway international joined the Eagles 12 months ago from Fulham, but was restricted to just 14 Premier League appearances as Palace surged up the table under Alan Pardew to eventually finish in tenth place in the table.

These are very exciting times at the club and I look forward to playing a part in making next year in another successful one.

And Hangeland is excited by the prospects for next season, telling the club’s official website: “I’m delighted to have signed with Crystal Palace for the new season.

“I have really enjoyed working under Alan Pardew and we have a very talented squad who are all a really good bunch of lads to be around.

“These are very exciting times at the club and I look forward to playing a part in making next year in another successful one.”

Meanwhile, midfield linchpin Mile Jedinak has dismissed rumours suggesting that he could be on his way out of Selhurst Park this summer.

The Australia international was reported to be interesting West Brom, but Jedinak, who joined Palace in the summer of 2011, confirmed: “I don’t think I’m going anywhere. I’m very happy, where I’m at.

“Back end of last season I didn’t play in a few games for different reasons and people start to question. I have spoken to my management and my club and they’re very happy.”