Hart expects City to fight on 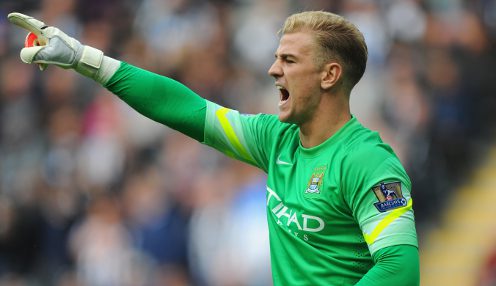 Manchester City goalkeeper Joe Hart has vowed his side will not give up in their bid to retain their Premier League title, as they prepare to visit Crystal Palace.

The Citizens have dropped down to fourth place in the standings after wins for both Arsenal and Manchester United on Saturday, with Hart and co now nine points adrift of leaders Chelsea with eight games to play.

However, England international Hart says he and his team-mates will not give up their title without a fight and will go all out for victory at Selhurst Park on Monday evening.

We’ll never give up while anything is possible. We’ll go for it.

He told his club’s official website: “We’ve got some massive games, eight big games to reach a level that we need to reach.

“We’ve not necessarily done that all season, but we feel we are in the right place now. We have a lot of rest time and there are no excuses. Everyone is fit and ready to go.

“We’ve not necessarily reached the standard week-in week-out that we wanted to, but the beauty of football is that you get another chance and that starts on Monday.

“We never give up, that is one thing that is part of Manchester City that we’ve taken with us from the olden days. We’ll never give up while anything is possible. We’ll go for it.”

Citizens head coach Manuel Pellegrini took a similar line to that of his keeper, adding: “We have a lot of work to do. We need to win the next eight games.

“Is that realistic? Well, it’s always realistic to win the next game. You must focus on that and the next game is Crystal Palace.

“I think that when you have a mathematical chance to win it, you must always think you can do it.”