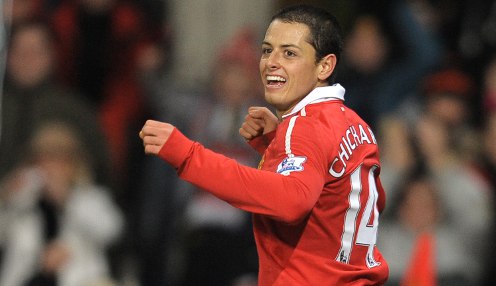 Mexico striker Javier Hernandez has been told he will have the opportunity to prove himself and fight for his place at Manchester United.

The 27-year-old – who has scored 59 goals in 154 appearances for the former champions – spent last season on loan at Real Madrid after losing his place in the pecking order behind Wayne Rooney, Robin van Persie and Radamel Falcao.

Hernandez has since returned to Old Trafford and will join up with the rest of the squad in the USA on pre-season at the end of this month.

Speaking after the 1-0 win over Club America in Seattle, van Gaal said Hernandez will be given the chance to fight for a place.

“Chicharito is coming on 25 July,” the boss said in his press conference. “Okay he can prove himself again and now Falcao and van Persie are gone, so his chances are better now.”

Wayne Rooney and James Wilson are the only recognised strikers in the United squad after van Persie left for Fenerbahce and loan signing Falcao joined Premier League rivals Chelsea.

The manager has revealed he is still on the lookout for new signings but said he was not concerned by a potential shortage of options and hinted he was ready to splash the cash again.

He told reporters: “No, as still we have Rooney – he can play in the strikers’ position. All the media last year wrote he has to play there and I listen to the media! And we have ‘Chicharito’, and maybe Wilson, and maybe there comes a surprise. You never know, it is a process. I am not worried about that position.”