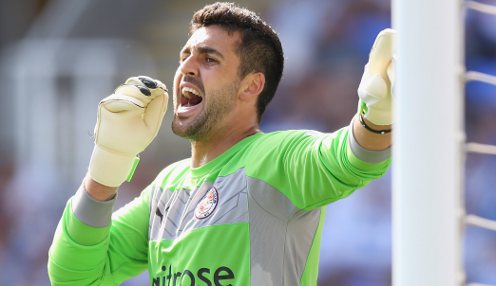 Keeper Adam Federici is one of the new men at Bournemouth.

Bournemouth manager Eddie Howe says he is actively looking for further recruits to ensure his side are competitive in the Premier League next season.

The Cherries have already brought in Artur Boruc, Adam Federici, Sylvain Distin, Tyrone Mings, Christian Atsu and Joshua King this summer, but Howe says that more new arrivals are likely, with the South Coast club determined to make their mark in the top-flight.

If we can add a couple more we will be pleased.

He told Sky Sports News: “We are looking (for more players). I wouldn’t put a number on it, but we are still active in the market and are looking to improve certain things.

“We know we are going to have to be stronger and better equipped for a long Premier League campaign.

“It’s not about numbers, it’s about quality, quality players in a couple of positions. If we can add a couple more we will be pleased.”

And Howe is well aware that the speed of their rise means that they are facing a real battle to compete next term, adding: “It’s been an incredible few years for this club, but we are here now and we have to get to work and realise the challenge.

“There is no honeymoon period for us. We have to work hard and make sure the team is the best it can be.”