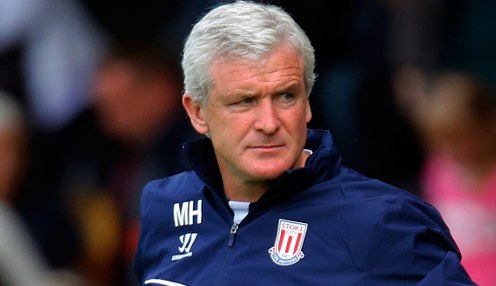 Manager Mark Hughes believes that there is more progress to be made at Stoke City, having signed a new three-year contract at the Britannia Stadium.

The 51-year-old Welshman took charge of the Potters in May 2013 following the departure of Tony Pulis and guided City to ninth place in the Premier League last term, while this season Stoke are tenth in the standings with eight games to play.

I came here 18 or so months ago and it’s gone as well as I could have hoped.

And Hughes, who has also managed Wales, Blackburn Rovers, Manchester City, Fulham and QPR, is excited about the future for the Potteries outfit.

He told the club’s official website: “I think it’s exciting times for Stoke City – everyone can see there’s more progress to be made and we want to see how far we can take the club.

“I came here 18 or so months ago and it’s gone as well as I could have hoped – we’ve certainly kept progressing, which is vitally important from my point of view.

“Continuity is a huge thing in football, certainly in the Premier League and hopefully the fact I’ve signed a new contract will give continuity to the club.”

Next up for Stoke is a trip to Stamford Bridge to take on league leaders Chelsea at teatime on Saturday 4th April, with City seeking revenge for a 2-0 defeat the Britannia Stadium just before Christmas.