Injuries leave LVG with a puzzle 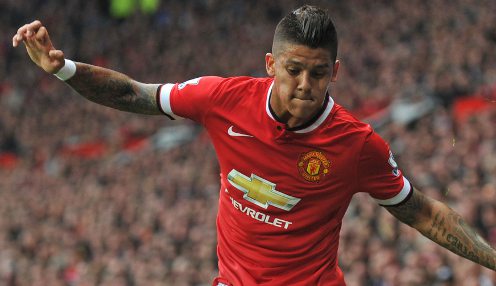 Defender Marcos Rojo has been ruled out of the trip to Chelsea.

Manchester United head coach Louis van Gaal says he has a puzzle to solve, with a number of injuries to key players ruining his plans for the crucial visit to Chelsea.

The Red Devils tactician has confirmed that Michael Carrick, Phil Jones, Daley Blind and Marcos Rojo will miss the game at Stamford Bridge, having all been injured in the stunning 4-2 derby win over Manchester City on Sunday.

Daley Blind and Michael Carrick could play as a holding midfield player and I do not have another option. It is a puzzle.

Van Gaal does have Luke Shaw available to come in at left-back, but his options in a holding midfield role are limited due to the absences of Carrick, Blind and Jones.

Paddy McNair is poised to take his place in the centre of defence alongside Chris Smalling, with Jonny Evans still suspended, with Van Gaal admitting that he has plenty to ponder for the showdown with the current Premier League leaders.

He told reporters: “It is the worst scenario. Marcos and Phil can both play left central defender and Jonny Evans is also suspended, so I do not have many choices.

“Daley Blind and Michael Carrick could play as a holding midfield player and I do not have another option. It is a puzzle.”

Meanwhile, Van Gaal is eager to keep the pressure up on the Blues, insisting that United are not yet out of the title race altogether.

He added: “It’s still possible. We are behind Chelsea, but we have to play against them and so do Arsenal.

“So we can lay pressure on Chelsea’s shoulders. You never know what can happen, we have seen things happen before in the Premier League.

United are currently eight points adrift of the Blues, who also have a game in hand, with second-placed Arsenal sandwiched in between that pair – seven points behind Chelsea.