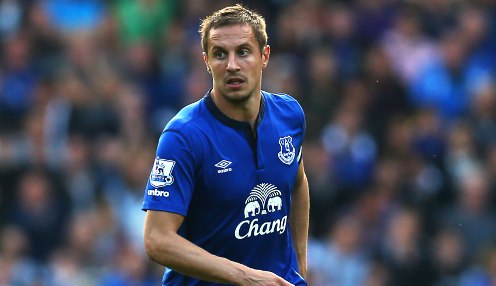 Phil Jagielka says he is looking forward to the “menace” that new signing Gerard Deulofeu will bring to Everton next season.

The Spaniard, who makes a return to Goodison Park, having spent the 2013-14 season on loan with the club, has completed a permanent move to Merseyside from Barcelona which will be completed on 1 July.

Having already played together in the Toffees side, England defender Jagielka is excited at the potential impact Deulofeu will make next season.

He told the club’s official website: “He’s always going to be a menace and create things and I’m sure that’s why the manager has brought him in.

He’s always going to be a menace and create things.

“It’s a big thing with Gerard. As far as winning matches – getting those goals, getting those crosses in, beating people, winning free-kicks and things like that – he’s something special.

“We’ve not had an up-close view of him over these past 12 months but it will be interesting to see how he’s added to that and matured into his position. It will be exciting for the fans to come and watch him.”

Deulofeu made just two appearances for the Barcelona senior squad during his time at the Camp Nou.

After making 25 appearances for Everton during the 2013-14 he also spent last season on loan, remaining in Spain with Sevilla. He played 17 times for last season’s Europa League winners who will compete in the Champions League next season.

Deulofeu will be joined at Goodison Park next season by Manchester United midfielder Tom Cleverley, who spent part of last season at Aston Villa, and whose move to Merseyside will also be finalised on 1 July, when the summer transfer window opens.