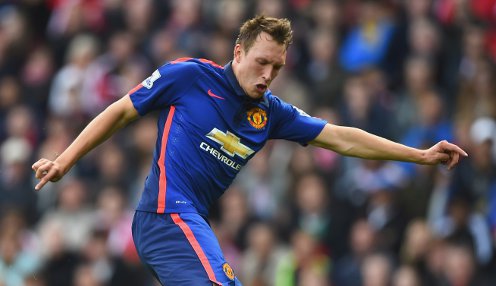 Manchester United ace Phil Jones is hopeful that he and Chris Smalling can forge a successful long-term central defensive partnership at Old Trafford.

The England duo have helped the Red Devils win four in a row in the Premier League to boost their bid for a top-four finish, with United now only two points adrift of Manchester rivals City in second place.

Now we have had back-to-back games together we can keep it going and keep playing well together.

And Jones is enjoying his time alongside Smalling, with the pair having been earmarked as the long-term successors to Rio Ferdinand and Nemanja Vidic.

He told the club’s official website: “It had been documented that me and Chris were going to be the next centre-backs at United, but it has not gone how we would have liked it.

“Somebody told me the other day that we have actually only played alongside each other about four times in four seasons.

“You cannot build a partnership on four games. Hopefully, now we have had back-to-back games together we can keep it going and keep playing well together. We complement each other well.

“It is not just Chris and I going for the position though, we have some great players in the squad.”

United return to Premier League action on Saturday 4th April, when they play host to relegation threatened Aston Villa, who have not won any of the last ten meetings between the two sides.