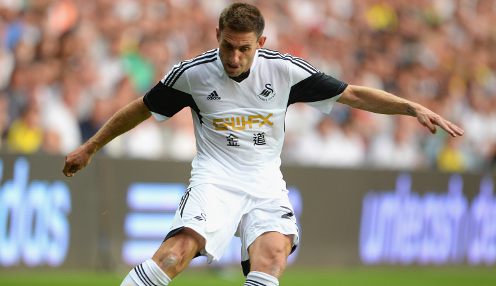 Angel Rangel insists he will continue to work hard in order to help Swansea City after signing a new one-year extension to his current deal at the Liberty Stadium.

Rangel says he is committed to the club even though he has recently lost the right-back shirt to Kyle Naughton, who boss Garry Monk signed from Tottenham in January.

To be part of this club for the next two years is great news for me.

The Spaniard has been with the Swans since the summer of 2007 and has already clocked up 277 league appearances for the club.

“I’ve been lucky enough to play regularly for the last eight years and to succeed personally and as a club,” Rangel said.

“To be part of this club for the next two years is great news for me. Playing for Swansea City for 10 years has always been a target for me. Seeing the likes of Leon Britton, Alan Tate and Garry Monk reach 10 years’ service for this club has been inspirational – they are great servants to the club.

“I wasn’t in the last year of my contract, so for the club to sort a new deal at this point showed the commitment, loyalty and faith the chairman and manager have in me.”

Swansea’s next Premier League match is against Liverpool on 16th March. They can be backed at 21.00 to win the game 2-0 and are 1.22 to finish in the top half of the table this season.