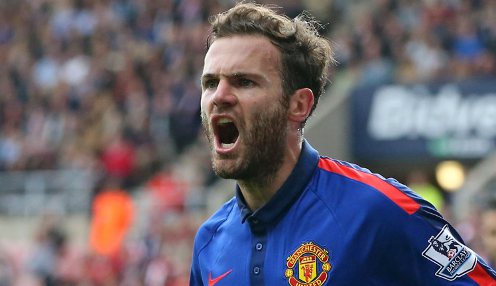 Juan Mata is hoping David de Gea will be at Old Trafford next season.

Juan Mata says he wants his Manchester United and Spain teammate David de Gea to be happy next season.

The midfielder says he hopes that will be alongside him at Old Trafford but he did not rule out the possibility de Gea may move on.

The pair have been together at Old Trafford since Mata switched from Chelsea in January2014 and Mata says his friend is highly sought after as one of the best goalkeepers in world football.

Speaking to Spanish newspaper Marca, Mata said: “Lots of people ask me about him. He’s a friend and I want him to be happy.

“He’s currently one of the best goalkeepers in the world. From a selfish point of view, I would want to have him in my team.”

With Real Madrid rumoured to have ear-marked de Gea as a replacement for Iker Casillas this summer, new Bernabeu boss Rafael Benitez could be lining up a bid for de Gea in the near future.

From a selfish point of view, I would want to have him in my team.

Mata has played under Benitez during their stint at Stamford Bridge and his thoughts on the former Liverpool manager certainly will do nothing to dissuade de Gea from a possible link-up at Real Madrid.

“I had him at Chelsea and we won the Europa League. It was a great campaign, my best in terms of statistics. Benitez knows how to get the most out of every player and get them performing to their best,” Mata added.

Manchester United are 6.00 to win the Premier League next season, with defending champions Chelsea 2.50.