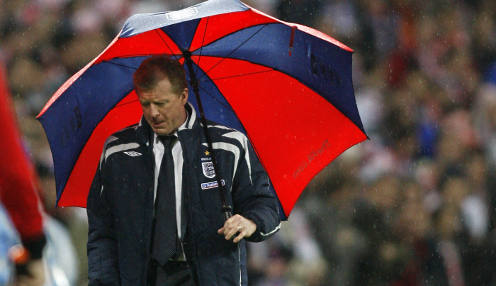 Steve McClaren pictured during his time as England head coach.

Steve McClaren has been charged with winning a trophy and securing a top-eight Premier League finish after being confirmed as the new head coach of Newcastle United.

Former England boss McClaren, who has also been handed a place on the St James’ Park board, has been handed an initial three-year deal to take charge of the Magpies and has been left in no doubt about what is expected of him on Tyneside.

Steve has been tasked to secure a top-eight finish in the Premier League and he is also heavily incentivised to try to win a cup competition.

Managing director Lee Charnley told the club’s official website: “This is a huge job which comes with considerable pressures.

“I am convinced that Steve not only understands the weight of expectation that comes with this role, but that he has the strength of character and professionalism befitting of a club of our size and status.

“Steve has been tasked to secure a top-eight finish in the Premier League and he is also heavily incentivised to try to win a cup competition.”

Meanwhile, McClaren, who was axed by Derby County after they failed to reach the Championship play-offs last season, is also prepared for the major challenge of trying to get Newcastle moving in the right direction.

He added: “There’s a lot of work to do, but the club has made it clear about wanting success and I would not have come here if I didn’t believe they were serious.

“This club has waited far too long to win a trophy, that’s one of my primary objectives here. A club the size of Newcastle United should be winning cups and finishing in the top eight in the Premier League.”

Last season the Magpies escaped the drop in the final game, winning 2-0 at home to West Ham to ensure their top-flight survival.

They can be backed at 4.50 to be relegated next season, with Sunderland 3.25 and newly-promoted Norwich City 2.10.