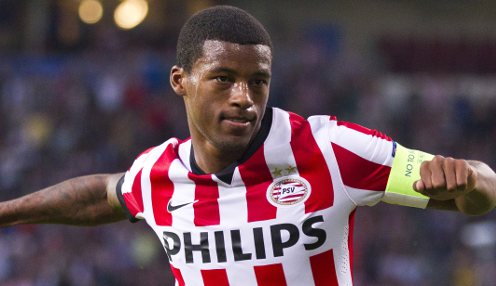 Georgino Wijnaldum has a new team-mate at Newcastle United.

The 20-year-old Serbia international, who has won 13 caps to date, has agreed a five-year contract with the Magpies, having scored more than 40 goals in two seasons with Anderlecht.

We have fought off a lot of competition to secure a top young talent in Europe.

And McClaren is expecting big things from his latest new recruit, with the Tynesiders determined to try and improve on last season, when they narrowly avoided being relegated to the Championship.

Former England boss McClaren told his club’s official website: “This is a fantastic signing for us. We have fought off a lot of competition to secure a top young talent in Europe.

“Aleksandar is someone who can develop with the team and someone who will help us to get to where we want to go. It is another demonstration that we are wanting to push on.”

Mitrovic started his career in his homeland with Partizan Belgrade, before heading to Belgium in August 2013, helping Anderlecht with their domestic league title in his first season with the club.

He is the second major arrival at St James’ Park so far this summer, following the recent £14.5million signing of Netherland midfielder Georgino Wijnaldum from PSV Eindhoven.

Newcastle are available at 6.00 to be relegated next season, while they are 1.22 to finish in the bottom half of the Premier League table and 41.00 to win the FA Cup.