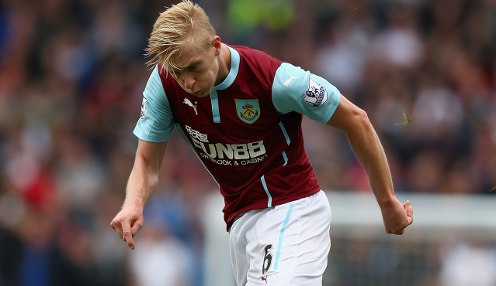 Burnley’s Ben Mee says the squad will cope well with the loss of Ashley Barnes from this weekend’s game.

The forward was sent off for two yellow cards in the Clarets last Premier League game, a defeat at Everton and therefore serves a one-game ban meaning he will miss this Saturday’s vital relegation clash with Leicester City at Turf Moor.

It gives someone else another opportunity to lay a marker down and affect a game of football for us.

His absence means a vacancy in the team and Ross Wallace, Michael Kightly and Matt Taylor, all players on the fringes of the first team, will hope to get the call up from manager Sean Dyche, who shares Mee’s confidence that the squad can cope with Barnes’s absence.

He added: “It gives someone else another opportunity to lay a marker down and affect a game of football for us. That will be a positive for whoever we decide to play.

A look at the league table underlines the importance of Saturday’s game. Both Burnley and Leicester remain in the bottom three but a win could take either side out of the relegation places. Burnley are 2.50. Leicester are priced at 2.80 and the draw is 3.25.

It is the visitors who are in better form, three consecutive Premier League wins lifting them off the bottom of the table. However, Burnley, since beating Manchester City in mid-March have lost three of the four games since.