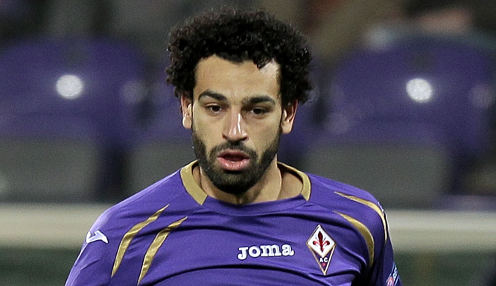 Mohamed Salah during his loan spell at Fiorentina last season.

Chelsea boss Jose Mourinho has revealed that he is happy to let Filipe Luis and Mohamed Salah leave Stamford Bridge and has ruled out a move for Paul Pogba.

Luis has been a bit-part player at last season’s Premier League champions and has been linked with a return to Atletico Madrid this summer.

Chelsea signed the Brazilian for £15.8million and Mourinho has suggested that he will not let him return to the Vicente Calderon for a cut-price fee.

I see Salah’s future elsewhere, either as a loan or an offer that we are happy to accept.

Meanwhile, Mourinho has also admitted that Salah, who is wanted by AS Roma after a loan move to Fiorentina failed to materialise, can also leave.

He added: “I see Salah’s future elsewhere, either as a loan or an offer that we are happy to accept. At the moment, with Hazard and Willian, Traore, Moses and Cuadrado, we have five players for these positions. It is better not to have so many.”

The Chelsea boss has also ruled out a move for Juventus midfielder Pogba, saying: “Pogba is one of the top players in the world. Pogba goes to any team and improves that team automatically.