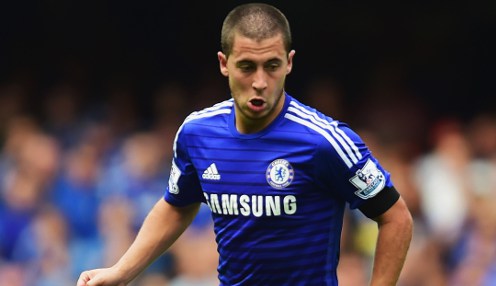 Jose Mourinho has played down concerns Eden Hazard could be a future target for Real Madrid and Diego Costa’s hopes of returning against Arsenal.

Santiago Bernabeu and France legend Zinedine Zidane raised the prospect of Hazard being tempted away from Stamford Bridge when he asserted the Belgium midfielder is in the top three players in the world on current form.

“He just signed a new contract. We didn’t put a gun to his head. He likes Chelsea, he likes the league and he has made a commitment to that. I don’t think he is interested in going.”

However, Mourinho has said he does not expect the 24-year-old, who last month signed a new five-and-a-half-year deal with Premier League leaders, to consider leaving.

He told reporters in his pre-match briefing: “In this moment, he is a fantastic player. I always say the most important thing is the team and their targets. If he wins the Premier League his season is fantastic. If on top of that he gets individual awards then it is nice.

“He just signed a new contract. We didn’t put a gun to his head. He likes Chelsea, he likes the league and he has made a commitment to that. I don’t think he is interested in going.”

Speaking ahead of Sunday’s huge derby against Arsenal, the Portuguese coach said injured Spain striker Costa is unlikely to be risked against Arsene Wenger’s men.

He added: “Diego Costa is nearly there. If not Arsenal then Leicester. We are coping for the difficulties of every match without him. The team is playing in a different way but we are doing our job. We are more strategic and less artistic but are getting results.

“I would love Diego to be back but I trust the other people. [Dominic] Solanki did not play yesterday with the Under-21s to be ready if we need him.”

Mourinho also said he had no qualms about playing former Arsenal favourite Cesc Fabregas, who makes his first return to Emirates Stadium on Sunday, against his old club.

“If he has some bad reactions he can cope,” he said. “I know he chose Chelsea. I don’t know why he didn’t choose Arsenal.”

Arsenal are currently priced 2.40 in the match betting and the draw outcome is quoted 3.30. Chelsea are available to back in the 90 minutes market at 3.30.