Nasri vows to fight for his place 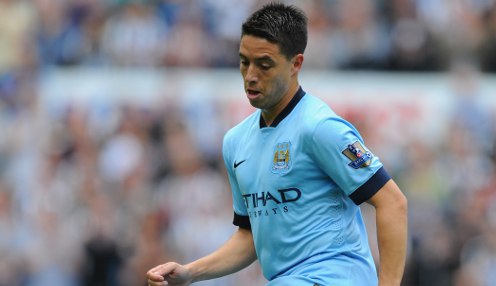 Samir Nasri has admitted that he needs to improve his displays for Manchester City in the future after enduring a disappointing 2014/15 campaign.

Manuel Pellegrini’s side failed to win a major trophy last season while French midfielder Nasri struggled with injuries and poor form throughout the campaign.

However, Nasri still has four years left on his contract with the club and is in no rush to leave City despite speculation linking Raheem Sterling and Jack Wilshere with summer switches to Pellegrini’s side.

When you play for a team like City you expect to win a trophy every year.

Nasri, who played a key role in Manchester City’s two Premier League title triumphs in 2011/12 and 2013/14, said: “I had a bad season. From a personal point of view it was disappointing because I couldn’t produce the same form as I did the year before and I had a lot of injuries – the most I’ve had in one season in my career.

“It’s difficult but at the same time it makes you stronger mentally. When you play for a team like City you expect to win a trophy every year.

“I still have four years left on my contract so what I want now is to be focused on my rehab. I’m going to work a lot in pre-season to come back as fit as possible with a new state of mind – then have a great season and win trophies.

“That’s my ambition and I will try to do everything I can to succeed next year.”

Manchester City are available at 3.75 to win the 2015/16 Premier League title outright while they are 1.72 not to win a major trophy next season.