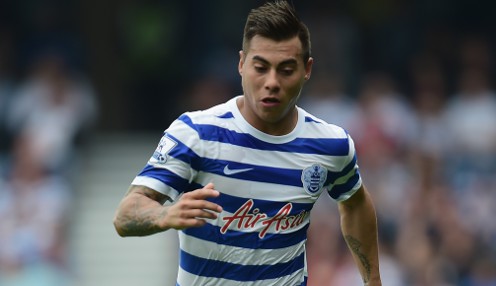 Eduardo Vargas will not play for QPR again this season.

Nedum Onuoha accepts it is a miracle that QPR still have a chance of avoiding making an immediate return to the Championship.

On several occasions this season, QPR have looked to be doomed to suffering relegation, but the incredible 4-1 victory at West Brom has lifted spirits at Loftus Road ahead of Tuesday’s trip to Aston Villa.

Rangers know a victory at Villa Park will see them climb above their relegation rivals and out of the bottom three which Onuoha thinks is a remarkable turn of events.

He said: “Every so often we have looked at how the season has gone and been disappointed at where we are.

“But given certain things that happened to us at the start and so on, I do consider it to be an absolute miracle to still be in with a chance now.”

I do consider it to be an absolute miracle to still be in with a chance now.

QPR defender Richard Dunne has been sidelined since February with a knee problem while Onuoha’s form has been so good that former Manchester United stalwart Rio Ferdinand cannot get in the team.

Meanwhile, striker Eduardo Vargas will not play again this season because of a knee injury. The 25-year-old Chilean, who scored in the victory at The Hawthorns, has suffered a grade two medial collateral ligament injury and could be sidelined until July.