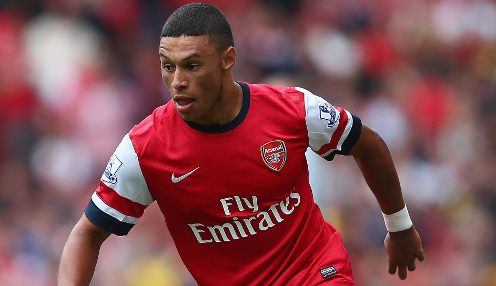 Arsene Wenger has said Alex Oxlade-Chamberlain is out for “three to four weeks” because of a hamstring injury but would not be pushed on a return for Jack Wilshere.

England winger Oxlade-Chamberlain limped out of the FA Cup win against Manchester United at Old Trafford on Monday and Wenger revealed on Friday he could be out for a month. The news is a major blow to the 21-year-old, who had only just returned to first-team action from a groin injury.

“He’ll be out for three to four weeks. It’s frustrating for him but he’s played more games this season than before. He’s shown his importance.”

“It’s a hamstring injury,” the Frenchman told reporters in his pre-match press conference.

“He’ll be out for three to four weeks. It’s frustrating for him but he’s played more games this season than before. He’s shown his importance.”

Wenger also refused to put a date on fellow midfielder Wilshere’s return from an ankle injury and said he will be given as long as is necessary to make a full recovery.

The 23-year-old has not played for the Premier League top-four chasers since November and Wenger revealed recently the England international was undergoing routine and minor surgery on his ankle.

“It’s very difficult to say when he will be back,” added Wenger. “We have to respect his recovery.”

The Emirates boss revealed he expects club captain Mikel Arteta to make his competitive return to first-team action in less than a month.

“He’s back in full training today [Friday]. I think he’ll return in three weeks,” he added.

Wenger said he was expecting another difficult derby against capital rivals West Ham on Saturday as the north Londoners look to make it five straight wins in the Premier League. The Gunners are currently priced 1.20 in the top-four finish betting.

“Sam [Allardyce] has done extremely well and has a lot of experience. It plays a part in this type of game,” said Wenger.

“The mood has been good since the FA Cup win over United but focused as well. We are all looking forward to the West Ham game.”