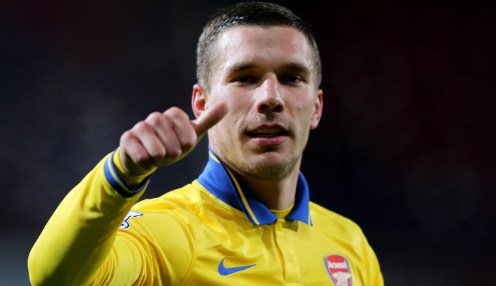 Striker Lukas Podolski has completed a move from Arsenal to Galatasaray for an initial fee of £1.8m.

The 30-year-old Germany international has signed a three-year deal with the option of a fourth with a deal that could rise over £10m.

Podolski joined Arsenal three years ago but was unable to establish himself as a regular in Arsene Wenger’s first eleven.

He spent the second half of last season out on loan at Inter Milan and having returned to North London at season’s end, he sought assurance from the Gunners boss that he had a role to play in the first team next season, where Arsenal are 5.50 to win the Premier League.

I came to a winning team that will compete in the Champions League.

Wenger was unable to guarantee him regular football and told the forward he was free to leave the Emirates.

Galatasaray immediately made their interest known and Podolski quickly declared himself to be keen on the move.

The player spoke of his joy at securing the move, having grown up in a Turkish area.

“First of all I would like to thank everyone,” he said.

“My parents supported me to go to Galatasaray and I am very happy for it to be agreed. I came to a winning team that will compete in the Champions League if we qualify.

“Galatasaray fans gave support in the years to me and I feel a large share of warmth today while I’m signing.”

“Podolski was a player we have been following for a long time. We have met the expectations of our fans. We think he will serve us for many years,” Aydin said.

Galatasaray are 151.00 to win the Champions League next season, while Arsenal are 26.00 to win Europe’s premier competition for the first time.