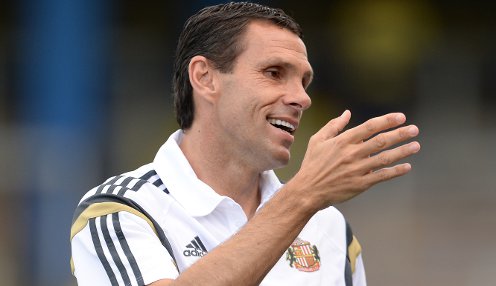 Sunderland have confirmed they have parted company with manager Gus Poyet after 17 months in charge in the wake of Saturday’s 4-0 home defeat to Aston Villa.

The Black Cats have slipped to within one point of the relegation zone following another damaging loss at the weekend, Villa scoring all their goals in the first half as they leapfrogged the Wearside club in the standings.

Many supporters at the Stadium of Light left before half-time rather than stay and see their team lose at home for the sixth time this term.

Sadly, we have not made the progress that any of us had hoped for this season and we find ourselves battling, once again, at the wrong end of the table.

Sunderland have struggled to pick up wins all season, managing the joint-fewest in the Premier League having collected maximum points just four times in the campaign.

Poyet’s poor win ratio was one of the reasons why the Sunderland board decided to part company with him following a meeting with the Uruguayan coach on Monday.

A statement from Snderland said: “Sunderland AFC have parted company with head coach Gus Poyet this afternoon. An announcement will be made in due course regarding the head coach position. The club would like to place on record its’ thanks to Gus and wishes him well for the future.”

Chairman Ellis Short added: “I would like to thank Gus for his endeavours during his time at the club, in particular last season’s ‘great escape’ and cup final appearance, which will live long in the memory of every Sunderland fan.

“Sadly, we have not made the progress that any of us had hoped for this season and we find ourselves battling, once again, at the wrong end of the table. We have therefore made the difficult decision that a change is needed.”

The former Brighton boss took charge of Sunderland in October 2013 with the club bottom of the league and guided them to Premier League safety, and a League Cup final, in his first season in charge.

This term has not gone as well though and with nine games left the Black Cats are 2.50 to be relegated.

Sunderland, who have won just one of their last 12 league matches, face a tricky trip to West Ham this weekend, a game they are 4.20 to win.

They then welcome fierce rivals Newcastle to the Stadium of Light the following week.

View all b betting