Premier League Betting: Four key tactical battles to look out for this weekend 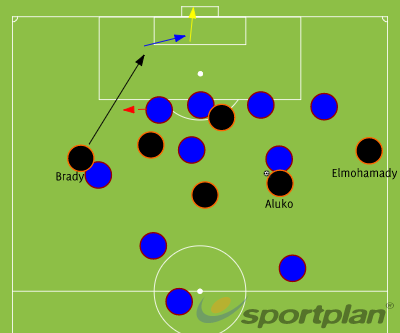 The swashbuckling positivity of Leicester City’s direct, wing-driven football has seen them charge towards Premier League survival in recent weeks. This forward, almost tumbling, momentum is unlikely to be barricaded by the cardboard cut-out shield that is Newcastle’s central midfield.

Cheick Tiote has been absent for some three months now, but John Carver has failed to find a suitable replacement or tactical adaptation to accommodate his loss. As a result, his team have slid into pitiful obscurity with Vurnon Anita, Mehdi Abeid, Jonas Gutierrez, and Ryan Taylor all displaying the positional discipline of soldiers who no longer believe in their general’s battle plan, but instead wish only to stay out of the firing line.

Week after week the primary tactical failing of Newcastle United remains within their central three, where poor Jack Colback is wildly overworked, his passionate and tenacious approach to defending exaggerated by the absence of these qualities in his team mates.

Newcastle have made 28 defensive errors this season with 11 leading to goals (the 2nd worst record in the league), whilst winning just 45% of their attempted tackles.

Five of the nine goals Newcastle have conceded in the last four matches can be traced directly to the half-hearted pressing and positional wandering from central midfield, with the enormous gap between the defensive and midfield lines an occurrence as frequent as it is bizarre.

Invigorated by the goal he scored against Swansea a fortnight ago, Andy King – without a league start since January – made six tackles and four interceptions in the victory over Burnley last weekend. Considering the tenacity and physicality of Burnley’s harassing midfield (10 tackles per game in central midfield), he should easily dominate Newcastle’s. The pace and desire of Leicester City will, surely, split Newcastle apart with ease.

Considering the points margin between these two teams, it is both testament to Chris Ramsay and discredit to Brendan Rodgers that this fixture should be considered difficult to call. With Matt Phillips in outstanding form from right midfield and Hector Moreno continually displaying tactical naivety, this could be the battleground that decides the encounter.

Phillips has amassed seven assists and scoring twice in his last ten appearances and has, on average, created four chances per match in each of the last four games. It took Phillips some time to settle into Premier League life, but recent performances indicate that the former Blackpool man could be the decisive factor in QPR’s survival bid.

His opponent this week, Moreno, is often defensively outmanoeuvred by talented wingers; last month, he was bamboozled by Juan Mata and Aaron Ramsay in Liverpool’s successive defeats to Manchester United and Arsenal. Positional errors from Moreno led to both of United’s goals and Arsenal’s opener.

If QPR’s counter-attacking drives and Bobby Zamora flick-ons land at Phillips’ feet, Moreno and company may be in trouble.

Manchester City have won just once away from home in 2015, and seem unlikely to shake off their slumber against a re-energised Tottenham Hotspur team who, with Erik Lamela finding a bit of form, have scored five goals in their last two games.

A key attribute of Spurs’ attacking philosophy is the superb movement of Harry Kane who, running into the channels, successfully drags defenders away from the central areas that Tottenham like to overload. For this reason, with Lamela and Nacer Chadli cutting inside, Fernandinho will most likely be overworked.

Man City have looked particularly vulnerable with Vincent Kompany on the sidelines and, as such, Mauricio Pochettino can expect to find joy in a bold, attacking approach; with each of Lamela, Chadli, and Kane scoring in the last fortnight, a bombardment of central zones could expose gaps in the Man City defence.

Arsenal’s phenomenal collective and individual consistency of late has deservedly propelled them towards a second-placed finish. If Hull City are to add another notable scalp to their list after the impressive win over Liverpool on Tuesday, then they will be hoping their recent switch to 3-5-2 catches Arsenal’s full-backs too high up the pitch.

Arsene Wenger’s team have been in superb form, but if there is a kink in their armour then it is the positional play of Hector Bellerin and Nacho Monreal; all of Arsenal’s last four goals conceded in the league (stretching back to February) can be traced to one of these two being beaten on the outside. As Hull showed in their defeat of Crystal Palace, a 3-5-2 with attacking wing-backs can exploit this weakness.

Ahmed Elmohamedy (1.7 key passes per match, three assists) has been Hull’s key creative outlet throughout the campaign, and from wing-back – a notoriously difficult position to mark – his influence only improves. He and Robbie Brady stretched the Crystal Palace defence on numerous occasions last weekend, making late runs into the channels for Tom Huddlestone to hit.

One of the main focuses of a 3-5-2 is the positional trickery of the wing-back who, neither pushing on as a winger nor needing to hold their run like a full-back, occupies a space between the lines. The opposition full-back either moves forward to mark them and thus compromise shape, or allow them freedom to run from deep. Palace were caught out for the opening goal.

Distracted by Elmohamady on the right, Palace’s defence was too narrow, allowing Brady to steal in.

Bellerin and Monreal tend to hold extremely high positions when their team-mates are dominating possession, potentially leaving them vulnerable to a counter attack that, whilst primarily focused through the power of Dame N’Doye and Sone Aluko in the middle, often ends with a piercing run out wide. Arsenal must be careful not to be distracted by Hull’s crowding of central midfield and attack.

Recommended Bet:
Back Dame N’Doye to score any time @ 14/5