Premier League Betting: Four key tactical battles to look out for this weekend

Confronted by the fearless energy of Aston Villa’s quick-footed triangles, Liverpool capitulated spectacularly, and learnt their lesson the hard way: underestimate Villa’s tactical intelligence – and individual skill – at your peril.

The key to Tim Sherwood’s triumph was cleverly switching Christian Benteke out to the left – thus avoiding a difficult confrontation with Martin Skrtel – and instructing Fabian Delph and Jack Grealish to provide close support.

Liverpool were overwhelmed by their passing triangles in this congested area of the pitch, and were startled by the speed and intricacy of Villa’s passing. Man City can expect a very similar battle on Saturday evening.

Benteke will fancy his chances of success against Pablo Zabaleta, and since confidence remains fragile in Manchester, Sherwood will most certainly instruct his players to bombard that back line. As such, Fernandinho will need to provide extra support from central midfield; Jesus Navas is ill-disciplined defensively (1 tackle, 0.6 interceptions per match) and, with James Milner injured, is City’s only viable option.

When those long balls hit Benteke’s head, Fernandinho will need to race over and support.

The biggest fear from a Man City perspective is that Zabaleta’s attacking instincts will leave them caught out by Villa’s counters, and as such it would be sensible to field Bakary Sagna in this role. Either way, the pressure from Grealish, Delph, and Benteke could be too great for a flat-footed team still struggling for form, and still expected to dominate with a high line.

It is no coincidence that Villa’s best performances to date have come against Tottenham and Liverpool, two teams that push onto the front foot and leave themselves vulnerable to the counter. Riding high from their Wembley win, Sherwood’s near-perfect month may be about to get even better.

Recommended Bet: Back Villa to win at 11/1

Chelsea’s 1-0 victory over Man United last weekend symbolised precisely the pattern of their recent form; having squeezed to victory despite lacklustre individual performances, Jose Mourinho’s team were either clinical or fortunate.

And throughout this strangely jaded yet satisfying period, it is the consistently brilliant Eden Hazard who has driven them to success, having scored or assisted four of their last seven goals. To stunt Chelsea is to stunt Hazard, and if Arsenal are to be successful they will need Francis Coquelin to cut-off distribution to the Belgian.

Once in possession, Hazard is capable of dipping inside to shoot, floating around the back and crossing, or skipping through on the diagonal and feeding the pass. And if the player is unstoppable, then the key is to stop the pass. Coquelin, averaging 4.5 interceptions and 5.8 tackles per 90, is the perfect man for the job.

Arsenal have earned 43 points from the 17 matches in which Coquelin has featured – at 2.5 points per game, this would result in a points tally of 96 over the course of a whole season. Needless to say, his role in preventing Cesc Fabregas from finding Hazard on the diagonal will be crucial. 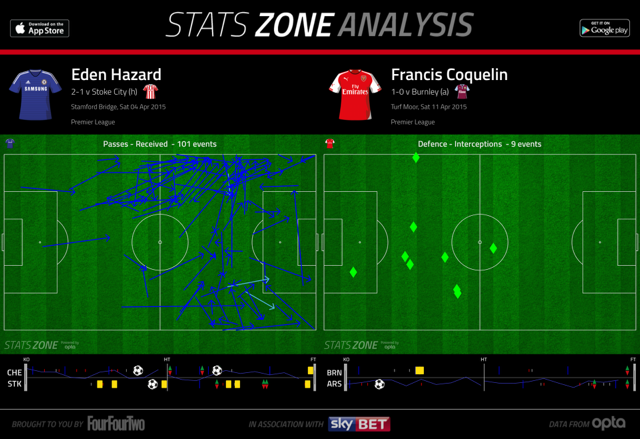 From the right side of central midfield, Coquelin’s interceptions (diamonds) will be needed to prevent Hazard receiving so many passes.

Recommended Bet: Back Arsenal to win at 29/20

A startling statistical similarity between these two sides is indicative of how tense, scrappy, and potentially decisive this match could be. And since bravely confrontational tactics depend heavily upon confidence and momentum, it is Leicester City who are favourites.

Both Burnley and Leicester are amongst the top three for long balls played, and the bottom three for average possession. And indeed both sides attempt to hurl forwards in attack, piercing bravely through the middle and pressing hard from the front. Burnley’s success has diminished as the season progresses and Danny Ings’ goals dry up, but Leicester – making 18.9 interceptions per match (2nd highest in league) and spending 28% of their time in the opposition half (higher than every team outside the top four) – are running riot.

We can expect a high intensity, congested central midfield with flying tackles and thumping long balls; this is a match for the two strikers – Jamie Vardy and Danny Ings – to race beyond the back four and collect these passes.

Vardy’s twisting slaloms and inward-bound charges towards the penalty area have been key to Leicester’s revival, and helped open up space for Jeffrey Schlupp by dragging opposition defenders into central positions. Leicester have averaged 31 crosses per match in the last five, up from a season average of 23.

Conversely, Ings is having a very hard time at Turf Moor. Having netted five goals in six games in February – during a period when Burnley looked destined for survival – he is now without a goal in eight games. Only seven players have scored for Burnley this season, and Ings’ goals represent 35% of Burnley’s total outlay; it is hardly surprising that they have scored just once in their last five matches.

In a frenetic encounter, keep an eye on the two strikers tearing through the middle; a goal for either could be historic.

Recommended Bet: Back Leicester to win at 9/5

Barton’s terrier-like approach to football – charging around maniacally, head bent forward and legs nipping at the ball – hums with aggression and determination, and Chelsea’s midfield were overwhelmed by his presence in QPR’s last fixture.

This weekend, his disruptive influence will be challenged, and mirrored, by Alex Song. The head-to-head between these two may be the fulcrum upon which this game swings, and with QPR in desperate need of points, Barton is the more likely to triumph.

Barton makes 49 passes and 2.1 key passes per game (highest in QPR team), but it is his defensive work that is particularly impressive; his aerial ability (2 won per game), tackling (2.8 per game) and interceptions (1.4) achieve greater results than any other QPR midfielder.

And so as Barton harasses the ball all over the pitch – teeth gnashed, mop of hair flying – Song’s primary objective will be to instigate a calming influence, that allows West Ham to progress towards goal without being sidetracked by the physicality of Chris Ramsay’s side.

Although frustratingly inconsistent, Song possesses the strength and strolling technical skill that will be required to prevent Barton’s tireless hounding from bamboozling West Ham into submission.

Recommended Bet: Back QPR to score first at 10/11