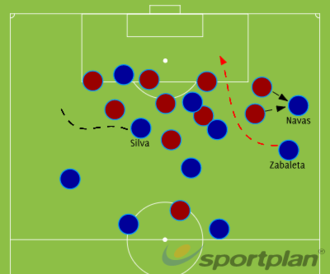 Alex Keble offers tactical analysis of four key battles to look out for in this weekend’s Premier League action, including how Dick Advocaat can save Sunderland and why Man City might lose again…

Man City’s lacklustre attacking performance against Burnley last weekend suggested a mental fatigue and passivity in the camp; looking unimaginative, it was easy for Burnley to sit deep, absorb pressure, and hit on the counter. West Brom are masters of this style and Tony Pulis will see this as the perfect opportunity to pour further misery on Manuel Pellegrini’s season.

Burnley’s victory was characterised by sitting in two deep defensive lines when Man City advanced into the final third, with particular focus on closing down David Silva quickly and doubling up on Jesus Navas. City’s positional rigidity and slow passing made defending very easy.

West Brom, who have kept six clean sheets in nine league matches since Pulis took charge, certainly know how to defend in this fashion. His side rarely make a challenge in the opposition half, playing a particularly deep Testudo-style structure against the top teams. In the last five games, they have averaged 38% possession and 206 completed passes – the lowest in the league by a considerable distance.

If City are to make the breakthrough, they will need Pablo Zabaleta to drive ahead of Jesus Navas and find pockets of space beyond the back four; his inside runs have unlocked deep sitting defences on numerous occasions this season.

Burnley stamped out the Navas threat with ease, Zabaleta failed to make his trademark inside runs, and Silva drifted into the most congested areas of the pitch. Unless these flaws are corrected, West Brom will certainly keep a clean sheet.

It is no coincidence that Man City’s attacks looked predictable and static at Turf Moor on a day that Zabaleta was uncharacteristically tentative moving forward. West Brom are the toughest defence in the country, and with City’s passing looking aimless and disinterested, it may take a special Zabaleta moment to prevent another humiliating defeat for Manuel Pellegrini.

Recommended Bet
Back the draw @ 9/2

Amidst what is likely to be a contest with plenty of technical artistry but also plenty of bite, the match-up between Manchester United’s new tactical centre piece and Liverpool’s best aerial threat could be the most important battle on the field.

The consistency with which United focused their attacking strategy upon Marouane Fellaini last weekend was unusual. Playing almost as a second left winger, he caused mayhem in the final third as United moved towards the direct, high tempo attacking football of the Ferguson era.

It is unlikely that Liverpool’s right-sided centre back Emre Can will be expected to challenge for these long balls, and instead it will be Martin Skrtel who holds the key to stopping United’s primary attacking strategy.

Skrtel wins more aerial duels (3.6) and makes more clearances (10.2) per match than any other Liverpool player; he is a powerful, no-nonsense defender ideal for the North-West derby. In an interesting head-to-head, it would not be surprising if one of these two players receives a red card.

Recommended Bet
Back Fellaini to score any time @ 13/5

Successive defeats have left Swansea sinking towards mid-table obscurity, and this probably isn’t the ideal time to be facing a newly rejuvenated Aston Villa, who thrashed Sunderland last weekend thanks to the magnificent performance of Charles N’Zogbia.

Tim Sherwood had spent the week showing the Frenchman videos of his Wigan days in an attempt to unearth the talents buried by a series of injuries and morale-sucking seasons at Villa Park. It clearly worked. His speed of turn and powerful runs terrorised Sunderland’s left-back, and reminded everyone why N’Zogbia was once tracked by Manchester United. 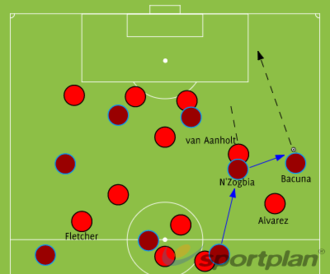 In order to avoid a similar fate, Garry Monk must ensure that Wayne Routledge tracks back; his average of 1 tackle and 0.7 interceptions per match is evidence of the attacking intent with which he is usually allowed to operate.

Defensive organisation will be vital against such opposition, especially considering that goalscoring has been a serious issue for Swansea since Wilfried Bony’s departure. They have scored eight times in the nine matches since then, a record that over a full season would lead to just 34 goals being scored. Only Villa, Leicester, and Sunderland will have scored fewer this campaign.

With a vast knowledge of European football and a typically Dutch attacking playing style, Dick Advocaat is a fantastic short-term option for Sunderland. Considering his tactical philosophy, and a propensity to play 4-3-3 with quick wingers supporting a lone striker, this could be the perfect moment for Ricardo Alvarez to finally spark into life.

The freshness of a new manager often reinvigorates certain players, and nobody needs a change of fortunes more than Alvarez. Since signing from Inter Milan last September, the Argentine was given very few opportunities by Gus Poyet – a naturally cautious, defensive coach.

This will most certainly change under Advocaat. Last season at Inter he averaged 2.7 dribbles and 1.7 key passes per game, amassing 8 assists in an impressive year in Italy. A roaming winger who enjoys cutting inside, his style perfectly suits his new manager’s tactics.

Sunderland need goals, and without Adam Johnson they desperately need more creativity in the team; their 7.9 key passes and 10.2 shots per game is among the worst in the division.

Like Tim Sherwood at Villa, Advocaat’s first objective is to instil some confidence and creative freedom into these players; Alvarez is, most definitely, the one player who needs to step up the most.

Recommended Bet
Back Sunderland to win @ 18/5