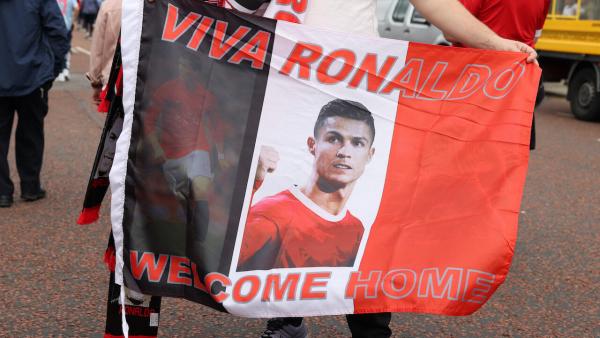 “The goals Bruno Fernandes and Jesse Lingard added to round off United’s 4-1 victory were more spectacular, but there is no mistaking the fact Ronaldo’s presence at the point of attack makes Ole Gunnar Solskjaer’s men a credible title contender. And, available to back at 5.04/1 in the Exchange, Ronaldo is already favourite to be named 2021/22 PFA Player of the Year.”

Manchester United’s social-media channels have celebrated Cristiano Ronaldo‘s return relentlessly since his signing from Juventus last month, and the home fans inside Old Trafford on Saturday appeared giddy at the prospect of cheering on the five-time Ballon d’Or winner.

But Ronaldo could not have anticipated his greatest welcome-home present being gifted to him by the opposition goalkeeper.

United toiled for much of the first half against Newcastle, with the well-organised visitors threatening to dampen the big occasion. But when Mason Greenwood cut inside from the right in stoppage time at the end of the first period, his low show was spilled by former England under-21 shot-stopper Freddie Woodman. And who reacted quickest to pounce and collect possibly the easiest of his 787 career goals?

Ronaldo had looked slightly out of sync with his new team-mates up until that point, but the goal helped settle him into the game. From there, he was tidy in his link play, energetic in his movement and, when played through by Luke Shaw to score his second of the game in the 62nd minute, as sharp as ever in front of goal.

The goals Bruno Fernandes and Jesse Lingard added to round off United’s 4-1 victory were more spectacular, but there is no mistaking the fact Ronaldo’s presence at the point of attack makes Ole Gunnar Solskjaer’s men a credible title contender.

The win took United top of the Premier League table – ahead of Chelsea by virtue of goals scored – and they are available to back at 8.27/1 in the Betfair Exchange Premier League Winners market.

Business as usual for title favourites

For all the Ronaldo hype, though, it is United’s cross-city rivals who, available to back at 2.3811/8 in the Exchange’s Premier League Winners market, remain title favourites.

It was a business-like performance from Manchester City as they beat a formidable Leicester side 1-0 at the King Power Stadium, with Bernardo Silva firing home from close range to net the game’s only goal.

Leicester were not without opportunities of their own, but Pep Guardiola‘s side’s command of the game was evidenced by the fact they out-shot their opponents by a whopping 25 efforts to six, with eight shots on target to the Foxes’ one. Even Fernandinho, a rare scorer, came within a whisker of making the scoreline better reflect the balance of play late on, flashing a shot wide of Kasper Schmeichel’s far post after an uncharacteristic burst into the box.

Conversely, Chelsea – current second favourites for the title, available to back at 3.7511/4 on the Betfair Exchange Premier League Winners market – mustered a result that flattered their display against Aston Villa in Saturday’s late kick-off at Stamford Bridge.

The away side harried Chelsea’s central midfielders to the point the debuting Saul Niguez was hooked at half-time having coughed up possession multiple times. Villa were unfortunate not to score, thwarted by a fine goalkeeping performance from Edouard Mendy, and can consider themselves very unfortunate to have ended up on the wrong side of a 3-0 scoreline.

But, scorer of two spectacular goals – his first strikes at Stamford Bridge – being able to call upon players of the quality of Romelu Lukaku will be the difference-maker in many a fixture for Thomas Tuchel’s Blues this term. And playing within yourself yet still winning comfortably is the mark of a great side.

Joining United and Chelsea on 10 points from the first four rounds of league fixtures, Liverpool saw off Leeds at Elland Road on Sunday afternoon. A horror injury to gifted 18-year-old midfielder Harvey Elliot put a downer of the Reds’ comfortable 3-0 win, in which Mohamed Salah became the 30th member of the Premier League’s 100 club, reaching century of English-top-flight strikes as he opened the scoring.

Jurgen Klopp‘s side are available to back at 6.05/1 in the Exchange’s Premier League Winners market.

The only remaining 100% start to the new Premier League season tumbled in Saturday’s early kick-off as Tottenham – who’d won three from three, all 1-0 – were overturned by Patrick Vieira’s Crystal Palace at Selhurst Park.

Defender Japhet Tanganga saw red for Spurs when two over-aggressive challenges in the space of five second-half minutes each earned him a yellow card. Palace pressed home their one-man advantage, with Wilfried Zaha netting from the spot before Odsonne Edouard – a £14m summer signing from Celtic – rose from the bench to score twice in the final six minutes.

Spurs are now available to back at 5.04/1 in the Betfair Exchange Premier League Top 4 Finish market.

And while it might be too soon for Arsenal fans to start dreaming of a re-entry into the top four – they are available to back 12.5 in the Exchange’s Top 4 Finish market – Mikel Arteta’s men finally got off the mark for the season, recording their first win of the campaign thanks to a Pierre-Emerick Aubameyang close-range strike against Norwich at the Emirates.

The level of opposition was a factor – with Norwich favourites to drop back down to the Championship, available to back at 3.052/1 with the Betfair Exchange to finish rock bottom in 2021/22 – but there was a renewed vibrancy to Arsenal’s play. Their 30 shots at goal was their highest tally since 2017.

These aren’t the good old days just yet for the Gunners, but they have at least, for now, arrested their alarming slide.