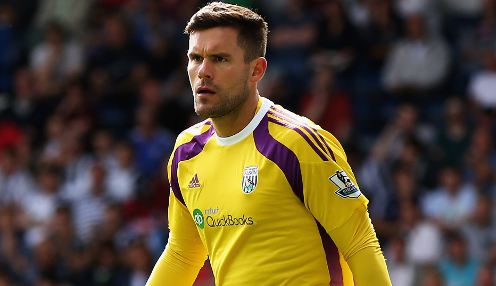 Albion keeper Ben Foster’s season is over due to a knee injury.

West Bromwich Albion head coach Tony Pulis has set his sights on eventually building his side into regular top ten contenders in the Premier League.

Pulis has helped the Baggies climb eight points clear of the drop zone since taking charge at The Hawthorns at the turn of the year and he has his sights set on better things next season, while focusing for now on ensuring survival.

It has gone a little bit off the rails in the last two or three years.

He told reporters: “The most important thing right now is to take care of this season. We will never look any further than beyond what is directly in front of us and the QPR game is massive.

“But it is a club which I think can be a top-10 club in the Premier League. That is the ambition I have and I know the chairman has too.

“It has gone a little bit off the rails in the last two or three years. I don’t think anyone can argue about that, it is now just about trying to get it back on track.

“We will talk about it (the summer transfer market) once we have achieved our goals – which is to stay up. We are still points away from that, but once that is achieved we will sit down and talk to the chairman.”

Albion play host to Rangers on Saturday, with the visitors four points from safety after losing their last five league games.

West Brom, who will be without the suspended Craig Dawson and injured duo Ben Foster and Callum McManaman, are 1.80 to take all three points, with the draw 3.60, while the visitors are 5.25 to secure a surprise victory.