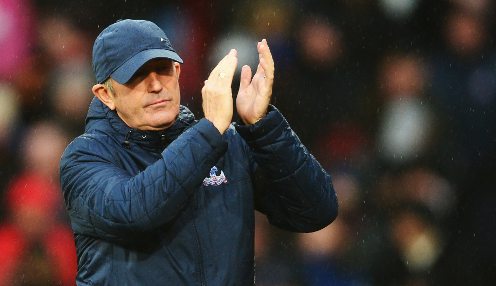 Tony Pulis has warned Manchester United Louis van Gaal he will be under more pressure to win the Premier League title next season.

The former champions are seven points ahead of fierce rivals Liverpool in the race to qualify for the Champions League next season with just four matches left.

“This is van Gaal’s first season in the league. Next year he has to come close to winning the league, he’ll know that.”

Former Netherlands coach van Gaal was brought in as a high-profile replacement for David Moyes when he was sacked less than 12 months into the unenviable task of succeeding Sir Alex Ferguson.

Pulis believes the 63-year-old will next season benefit from having an understanding of the Premier League and will be in a position to hit the ground running.

“Louis has obviously spent a bit of money and brought quite a few players in, I think he has had a year to look at it,” Pulis told reporters, ahead of West Brom’s visit to Old Trafford on Saturday.

“The difference from himself and [Chelsea manager Jose] Mourinho was that Jose knew the league. This is van Gaal’s first season in the league. Next year he has to come close to winning the league, he’ll know that.

“It’s been great experience for him this year. I’m sure he’ll add a few players to the squad next year. They’ll want to win it, I see them getting stronger, I can’t see them getting weaker.

A 2-0 victory at Crystal Palace and a goalless draw with Liverpool has moved West Brom seven points clear of the relegation zone.

But, with United, Chelsea and Arsenal still to play between now and the end of the season, Pulis says there will be no easing down from his players.

“We still need a couple of points and we have a tough run-in,” he added. “We’re underdogs in every game.”

Manchester United are currently priced 1.36 in the match betting and the draw is quoted 5.25. West Brom are available to back at 10.00.