Schweinsteiger out of Barcelona friendly 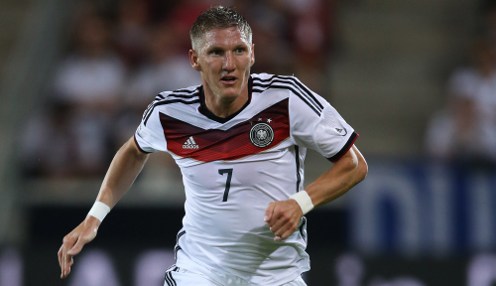 Manchester United midfielder Bastian Schweinsteiger will miss Saturday’s International Champions Cup friendly against Barcelona in California because of an injury.

The experienced World Cup winner has played in both of the club’s pre-season games in the USA so far, against America and San Jose Earthquakes, but will not be involved when the former champions take on last season’s Treble winners at Levi’s Stadium in Santa Clara (21:00 BST).

Louis van Gaal revealed on Friday his summer signing from Bayern Munich has an injury and will not be risked, but goalkeeper David de Gea will make his first appearance of pre-season.

“Bastian shall not play because he had a little injury,” van Gaal told reporters.

“I shall play with the line-up I think we could play against Spurs [on the first day of the Premier League season].”

Real Madrid have been credited with an interest in returning 24-year-old Spain goalkeeper de Gea to his homeland before the start of the new La Liga season. Van Gaal said in May the former Atletico Madrid goalkeeper faces a “difficult” decision about whether to stay at Old Trafford, but revealed on Friday he expects him to be ready for the season-opener against Tottenham.

The former Netherlands coach added: “We play the first half with players for 60 minutes. I have to make a selection now.

“When a player is injured it’s the same thing, you have to wait in the season. I give players time to recover and build up their fitness.

“It’s still possible he [de Gea] will be ready to start the season against Spurs because he shall play.”

Manchester United are currently priced 3.20 in the match betting and the draw outcome is quoted 3.50. Barcelona are available to back in the 90 minutes market at 2.15.