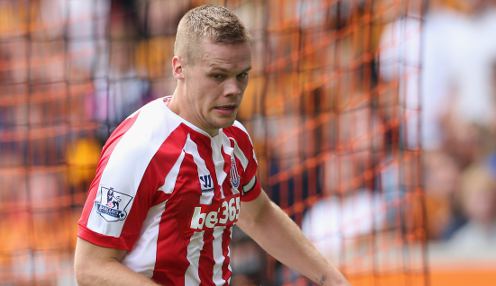 The former Manchester United prospect has not played a competitive fixture since injuring his back in his side’s 3-1 win against QPR at the end of last year.

“Since Boxing Day only two teams have picked up more points than us, so we are in a very good frame of mind,”

Influential defender Shawcross revealed this week he hoped to be included in the match-day squad at the Hawthorns and manager Hughes on Friday suggested the 27-year-old could come back in against Tony Pulis’s men.

“He is in my thoughts for the game,” Hughes, who added on-loan centre back Philipp Wollscheid is a “doubt”, told reporters.

Hughes replaced Pulis at the Britannia Stadium in May 2013 and his side travel to the West Midlands on Saturday chasing a fourth straight win in the Premier League. They have collected seven victories in the top flight since the turn of the year and have climbed to eighth in the table on 42 points. The Potters are currently priced 1.12 to finish in the top half of the table.

Hughes said his players are desperate to keep their good run going but admitted he was wary of a West Brom backlash.

“Since Boxing Day only two teams have picked up more points than us, so we are in a very good frame of mind,” Hughes added.

“WBA will want to address their previous two defeats, because they were big losses for them against their biggest rivals.

“But we have a good squad too, and we have players who currently have a good mindset and a winning mentality.”