Sherwood seeks win on his return 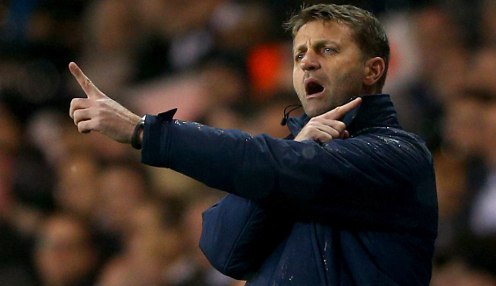 Tim Sherwood is keen to mark his return to Tottenham this weekend with a victory for his current team Aston Villa.

Sherwood replaced Andre Villas-Boas in the White Hart Lane hot-seat midway through last season only to then lose his job at the end of the campaign, with Mauricio Pochettino arriving from Southampton to replace him.

Sherwood says he bears to animosity to Spurs and has revealed that chairman Daniel Levy was keen to offer him another role at the club.

We have to try and eradicate some of the stupid goals we’re giving away.

However, Sherwood is pleased with the way things have worked out and is desperate to guide Villa clear of the relegation zone following a difficult few days for the club. They lost 3-1 at Manchester United last weekend before drawing 3-3 with fellow strugglers QPR at Villa Park on Tuesday.

Sherwood explained: “I was disappointed I was leaving Spurs but Daniel Levy didn’t want the divorce, he wanted me to stay in some kind of capacity.

“But I’m a manager now. It’s been great for me. It’s turned out brilliantly and I thank Daniel for that.

“Realistically we can get three points at White Hart Lane. We have to try and eradicate some of the stupid goals we’re giving away and we have to keep concentrated knowing we’ll be on the front foot.”