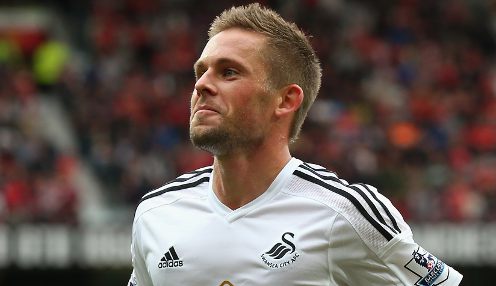 Swansea City midfielder Gylfi Sigurdsson admits he will always be grateful to Brendan Rodgers for helping his career.

The current Liverpool manager handed the Iceland international his debut in English football when they were both at Reading and then signed Sigurdsson on loan when he was Swansea boss.

When Rodgers was appointed Liverpool manager, Sigurdsson was also linked with a permanent switch to Anfield but he eventually moved to Tottenham.

I’ll always remember what he did for me because he played a big part in my career.

Sigurdsson, who is 4.50 to score at any time against Liverpool on Monday, went on to have an inconsistent two-season spell at White Hart Lane, but now admits he is settled at the Liberty Stadium.

He said: “I’m playing in a good team now and enjoying my football.

“With the Brendan link, going to Liverpool perhaps seemed more likely but Tottenham showed a lot of interest in me and, at that stage, they had players like Gareth Bale and things looked really good.

“I’ll always remember what he did for me because he played a big part in my career. I’ll always be thankful for that and I wish him all the best at Liverpool.

“He was the one who pushed me into the first team and I played my first games under him at Reading. He brought me to Swansea as well so I’ll always be grateful for what he’s done for me.”

The 25-year-old scored against Spurs earlier this month and has found the net seven times for the mid-table Swans this season.

Liverpool have lost just twice in 22 matches and are 2.25 top finish in the top four this season. The Reds can be backed at 19.00 to win Monday’s match 3-0 with Daniel Sturridge available at 5.00 to be the first goalscorer against Garry Monk’s side.