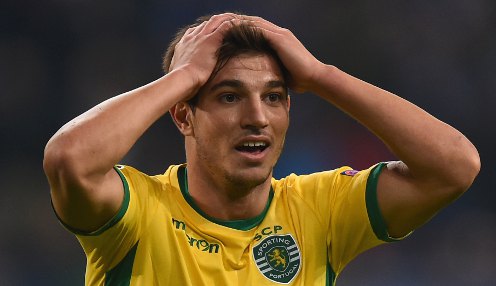 Cedric Soares has joined Southampton on a four-year contract.

Cedric Soares is looking to help Southampton improve next season after joining the Premier League side on a four-year deal from Sporting Lisbon.

The highly-rated 23-year-old Portuguese right-back has opted to link up with Ronald Koeman’s Saints having been linked with a number of top English clubs this summer.

Southampton is a big, big club in England and is very respected. It’s a club with a lot of history and, for me, it’s very important to play for a big club.

Soares has spent all of his career in his homeland at Sporting, who he joined at the age of eight, and he became a regular at first-team level while earning international recognition.

However he is now looking forward to testing his abilities in the Premier League next season as the Saints look to improve on their creditable seventh-placed finish last term.

“I joined this club because I believe we can do better and better every year,” said Soares on the club’s website.

“Everyone knows that the Premier League is a very, very good league – and maybe the best one in the world – so for me it’s a pleasure to be here, but even more of a pleasure to be in Southampton.

“Southampton is a big, big club in England and is very respected. It’s a club with a lot of history and, for me, it’s very important to play for a big club. I think this is a very good move.”

Sores is the second player to join Southampton this week following on from the capture of Juanmi from Malaga.