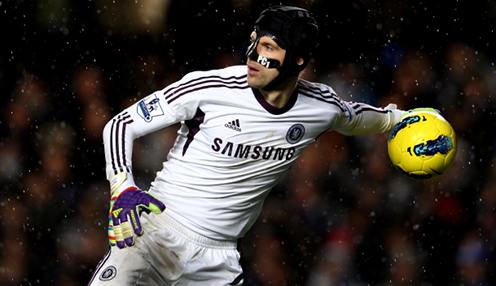 Chelsea captain John Terry has predicted Petr Cech will save Arsenal 12 or 15 points a season if he completes his move to the Emirates Stadium.

“Petr was an unbelievable professional last year. When you get left out of the team it can be hard to accept but, when he came in [to the side], he was exceptional.”

The 33-year-old has made over 300 appearances in all competitions for the champions and helped the club win the Champions League in 2012. He also won the Europa League with the west Londoners in 2013 and is a four-time FA Cup winner.

The former England captain Terry is concerned the signing of the Czech Republic international will give capital rivals Arsenal a huge lift in their summer recruitment plans.

Terry told talkSPORT: “There’s talk of Arsenal signing Petr Cech and, if they do get him, he will strengthen them for sure. He will save them 12 or 15 points a season.

“Petr was an unbelievable professional last year. When you get left out of the team it can be hard to accept but, when he came in he was exceptional.

“He deserves a lot of credit for that. We understand he wants to play first-team football but nobody wants to see him leave the club.

“He’s going to be sorely missed and will improve any side he goes to.”

Chelsea manager Jose Mourinho has yet to sign any new players since celebrating winning his third title with the club and warned last month he expects to be “a little busy”.

The Blues are quoted 2.50 in the Premier League outright winner betting, with Arsenal 5.50 and Manchester United 6.00.