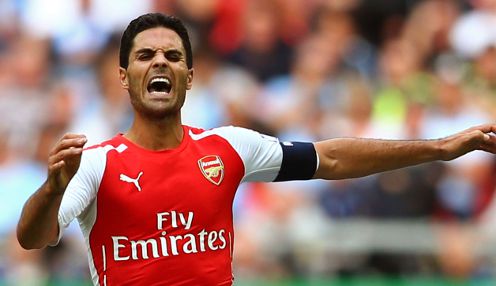 Arsenal boss Arsene Wenger believes Mikel Arteta’s experience is vital to his squad and is very happy to see him sign a new one-year contract.

It was announced on Wednesday that the 33-year-old has penned a 12-month extension with the Gunners, despite missing much of the previous campaign through injury.

The club captain failed to feature for the north London outfit after their Champions League win over Borussia Dortmund in November due to an ankle injury.

In Arteta’s absence, Arsenal retained the FA Cup and finished third in the Champions League with Francis Coquelin impressing while filling in for Arteta.

Despite being usurped by the Frenchman in Wenger’s midfield, the Gunners boss is adamant the former Everton man still has plenty to offer and has indicated he will be a first-team regular again when fit.

“He will stay with us for one more year because he has extended his contract,” manager Arsene Wenger told Arsenal Player.

“He’s one of the leaders in the club because he’s the captain of the team. I expect him to contribute much more than last season but he also faces a battle.

“With the number of games we have ahead, we could use his experience, his desire and his quality as it will be vital for next season.”

Arteta will hope to be involved when Arsenal kick-off their campaign against West Ham on 9th August, with Wenger’s men 1.33 to start the season with a win. The Hammers are 9.00 and the draw is 5.00.

The Gunners can be backed at 5.50 to win the Premier League title this season, with defending champions Chelsea 2.50.