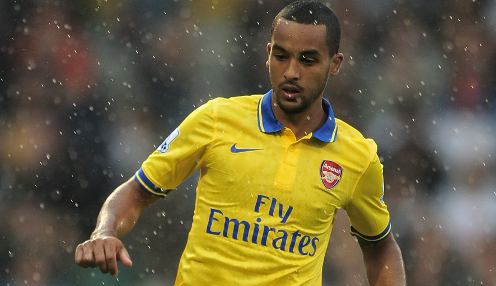 Theo Walcott has only made four starts for Arsenal this season.

Arsene Wenger has admitted that a deal to keep Theo Walcott at Arsenal beyond the summer of 2016 is likely to be a slow process.

The Arsenal manager said it had been “difficult to convince” the England international to stay at the Emirates before he signed a three-and-a-half year deal in January 2013.

Walcott was difficult to convince (in 2013) and that is why it took us much time.

Walcott has only made four starts this campaign as he has struggled with a knee injury. He has also found himself behind Alexis Sanchez, Olivier Giroud, Mesut Ozil, Danny Welbeck and Alex Oxlade-Chamberlain since his return.

However, he was on the bench for the Gunners’ FA Cup victory over Manchester United on Monday and could feature against West Ham this afternoon. Walcott has scored five times in his last four appearances against the Hammers and is 6.00 to open the scoring, while the Gunners are 1.33 to claim the three points. West Ham are 10.50 to win, with the draw 5.50.

Speaking ahead of the clash, Wenger admitted that tying the striker down to the north London club could prove tricky but stressed that competition is a factor of life at a big club.

He said: “Walcott was difficult to convince (in 2013) and that is why it took us much time.

“I want him to stay and be a regular player and fight for his place, but no matter where you go if it is a big club you have to compete for your place.”

Third-placed Arsenal are 1.20 to finish inside the top four at the end of the season.