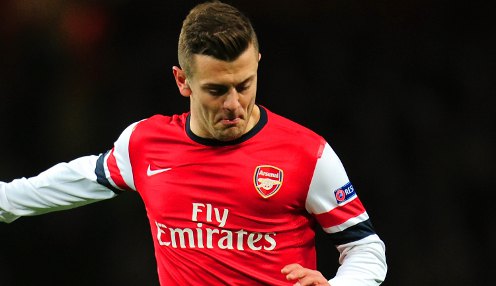 Arsenal midfielder Jack Wilshere says he is ready to make a first-team return after making an appearance for the Under-21s.

The England international suffered an ankle injury in November, which led to two operations.

Wilshere completed the full 90 minutes as the Gunners Under-21 side beat Stoke 4-1 on Tuesday and he now has his sights set on a return to the first-team.

Arsenal take on Reading later this month in an FA Cup semi-final and Wilshere would like to return ahead of that clash, but he feels he is ready to make a return now after his exertions on Tuesday.

He told the club’s official website: “You can train as much as you like but you can’t get that match fitness unless you play.

“I feel like I’m ready to play some part. When you’re injured you look at your comeback date and the games around that time.

“The one that stands out is the FA Cup semi-final but even before that we’ve got big games and we’ve got to go to Manchester United as well [in May] so there’s a chance to play this season.”

Arsenal are currently second in the Premier League table and not completely out of the running to secure the title.

The Gunners host the league leaders at the end of the month and a win for the Emirates Stadium outfit would reduce the deficit to four points, although Chelsea have a game in hand.

Arsenal are 8.00 to win the Premier League outright and 1.80 to secure the FA Cup title.